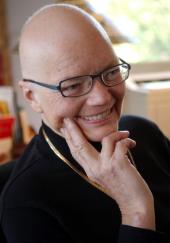 Molly Ivans succumbed today to her third bout with breast cancer. She was a syndicated columnist who appeared in some 400 papers across the US. Her favourite targets were Texas politicians whether in the state or in Washington.

Ivins was a liberal and proud of it. Ivins' best-selling books included those she co-authored with Lou Dubose about Bush. One was titled "Shrub: The Short but Happy Political Life of George W. Bush" and another was "BUSHWHACKED: Life in George W. Bush's America."

Ivins' jolting satire was directed at people in positions of power.

"The trouble with blaming powerless people is that although it's not nearly as scary as blaming the powerful, it does miss the point," she wrote in a 1997 column. "Poor people do not shut down factories ... Poor people didn't decide to use 'contract employees' because they cost less and don't get any benefits."

In an Austin speech last year, former President Clinton described Ivins as someone who was "good when she praised me and who was painfully good when she criticized me."
Posted by The Mound of Sound at 6:47 PM