Thrown To The Wolves 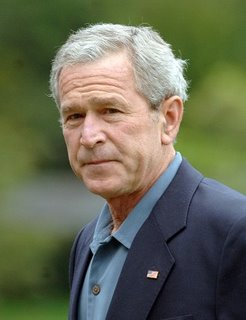 He bombed. By all accounts, George Bush's State of the Union Address last night was a dud. Usually a president can expect a bump in support after these things but Bush got no bump after his Iraq initiative speech a couple of weeks back and, by all accounts, he didn't seem to move anyone with his speech last night either.

Bush needed to win support last night - from his own, congressional Republicans. Many of them will be reading the winds of public opinion to decide whether to remain neutral or to join other Repubs in a revolt against the White House. The signs aren't good for George Bush.

The Democrats today begin the long-overdue investigations into the Iraq war. They'll have what George Bush can no longer command, a receptive audience from the American people. There are a lot of questions that the executive, sheltered by a Republican congress, was able to dodge. That cover is now gone and, with his support in tatters, this president is more vulnerable than at any time over the past five years.

Arrogance and naivete. In a president they make a lethal cocktail of bad judgment. George Bush didn't understand that, while you can deceive your people into a war, once you've launched that war you have to deliver the promised results. You have to win because you simply can't lie your way back out again.

What makes Bush's failure so remarkable is that the bar was set so low. In reality, he didn't have to uncover WMDs or show that Iraq was capable of attacking the US or even that Saddam was in league with al-Qaeda. The American people would have tolerated all of those inconvenient realities - if Bush had won his war as he'd promised.

The American people showed themselves willing to accept an "end justifies the means" war so long as the US won it fairly quickly. After all, isn't their country the world's only superpower? Who can stand up to that? Some nation that's been hobbled by a decade of sanctions? Never.

Everything else was window dressing. All George Bush had to do was to conquer Iraq but that he couldn't achieve. He didn't defeat the Iraqi military in the field - they vanished to return as an insurgency. He didn't achieve a surrender of the Hussein government - they too evaporated. Even without a defeat or a surrender it might have been enough if he'd been able to secure the occupied country but he didn't take nearly enough troops for that. He never intended to be in that position.

Bush has served up a fiasco that carries with it a national humiliation. For that he won't be forgiven.

Now the Frat Boy has to await his fate as a hostile congress pokes and prods and deconstructs his actions and decisions, one by one. The most secretive presidency in living history will now be dragged out into the light for public scrutiny and that is what George Bush must fear most. George Bush has been thrown to the wolves.
Posted by The Mound of Sound at 6:22 AM