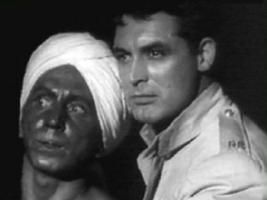 About the same time Gunga Din was being aired, Iraqi security forces, backed by US tanks and helicopters, were battling a murderous cult of their own, a messianic Shia sect calling itself "Soldiers of Heaven." It seems the cult's 40-year old leader styled himself as the "Mahdi", an Islamic prophet who is destined to rise again and judge good from evil.

The apocalyptic insurgents were hit just as they were preparing to ambush fellow Shiites about to celebrate the holiest day in the Shia Muslim calendar.

It is reported that 300 Soldiers of Heaven have been dispatched to their new home and 100 arrested. Just plain weird.
Posted by The Mound of Sound at 12:08 PM