Let Me Guess - They Stand Up, We Stand Down - Right?

Of course it's right. As soon as Afghanistan's forces stand up, Canadian forces will stand down. Gee, that sounds familiar, doesn't it?

A document recently obtained by CBC and "authored" by General Rick Hillier says Canada's military job in Afghanistan will be successful when:

- new Afghan security forces "are established" and "fully controlled" by the Afghan government.

- those forces are trained and can conduct their own "counter-insurgency operations."

- the forces can defend against foreign fighters and "effectively control borders."

- and when "terrorist groups are denied sanctuary within Afghanistan."

The Corp even puts forward a military analyst from - wait for it - the University of Calgary, to vouch for Hillier that the "mission" is doable, given enough time. According to Rob Huebert of the university's Centre for Military and Strategic Studies:

"The Taliban-al-Qaeda threat has not been entirely neutralized, and the big problem we have right now is the Pakistani border provides refuge," Huebert said. "Once that border gets sealed, then you can start dealing with the problem more effectively."

"Once that border gets sealed." And in what century will that be achieved? Sealing the border will essentially divide the two key mountain tribes, the Pashtuns and Baluchs, whose regions lie in both countries. 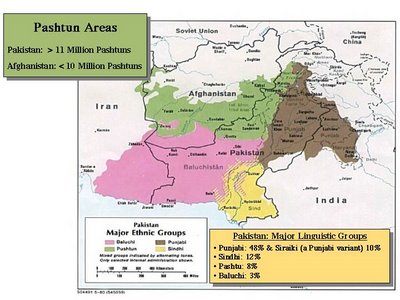 See the green (Pashtun) and the pink (Baluch) above and that black line that runs through those regions? That line is the border between Afghanistan and Pakistan and, as you can see, the tribal region extends through almost the entire border region between these countries. Note that there are actually more Pashtun living in what Britain drew up as Pakistan than in Afghanistan, same for the Baluchs. These people don't recognize this border and, even if they did, sealing a border that long through such immensely rugged terrain isn't likely to happen, not now, not in a hundred years.

Huebert is right that the Taliban-al-Qaeda threat hasn't been "entirely neutralized". Neither has the Taliban-Afghani threat been neutralized because it's estimated that 80% of the Taliban force isn't actually Talibs at all but disaffected Afghanis. So, once we defeat the Afghan people we can leave, is that it?

Maybe we should turn our guns on the Taliban's main recruiting service, the corrupt Afghan police who are widely credited with driving local Afghans to take up arms with the Taliban. Of course to do that we'd also have to blast away at the government and then that would get the warlords in the north thoroughly up in arms against us.

Hmm, there must be an answer, right?