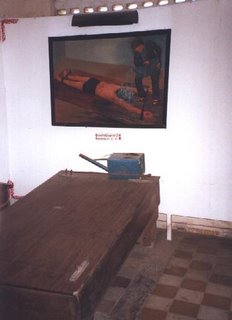 If the Americans are still torturing terrorism suspects, and George Bush assures us they're not so we have ample reason to worry, we're not hearing a lot about it. This seem to have changed since the good old days of Abu Ghraib. For starters, it seems that very little leaks out any more.

In Germany there is a complaint before the courts against former US defense secretary Donald Rumsfeld over torture during his time at the Pentagon. Included in the materials is this account of waterboarding taken from the 1958 memoir of French journalist Henri Alleg. Any doubts about waterboarding as full-bore torture are put to rest by Alleg's account:

"Together they picked up the plank to which I was attached and carried me into the kitchen. They rested the top of the plank, where my head was, against the sink. Lo - fixed a rubber tube to the metal tap, which shone just above my face. He wrapped my head in a rag and held my nose. He tried to jam a pice of wood between my lips in such a way that I could not close my mouth or spit out the tube. When everything was ready, he said to me, 'When you want to talk, all you have to do is move your fingers.' And he turned on the tap.

"The rag was soaked rapidly. Water flowed everywhere: in my mouth, in my nose, all over my face. But for a while I could still breathe in some small gulps of air. I tried, by contracting my throat, to take in as little water as possible and to resist suffocation by keeping air in my lungs as long as I could. But I couldn't hold on for more than a few moments. I had the impression of drowning, and a terrible agony, that of death itself, took possession of me. In spite of myself, all the muscles of my body struggled uselessly to save myself from suffociation. In spite of myself, the fingers of my two hands shook uncontrollably. 'That's it! He's going to talk,' said a voice.

"The water stopped running and they took away the rag. Iwas able to breathe. In the gloom, I saw the lieutenants and the captain, who, with a cigarette between his lips, was hitting my stomach with his fist to make me throw up the water I had swallowed. Befuddled by the air I was breathing, I hardly felt the blows. "Well then?' I remained silent. 'He's playing games with us! Put his head under again!'

"This time I clenched my fists, forcing the nails into my palm. I had decided I was not going to move my fingers again. It was better to die of asphyxiation right away. I feared to undergo again that terrible moment when I felt myself losing consciousness, while at the same time fighting with all my might not to die. I did not move my hands, but three times I again knew this insupportable agony.

"In extremis, they let me get my breath back while I threw up the water. The last time, I lost consciousness."

And those bastards wanted to debate that this is torture? Here was Cheney's take on waterboarding last October:

"Cheney indicated the Bush administration doesn't regard waterboarding as torture and allows the CIA to use it. "It's a no-brainer for me," Cheney said.

"Cheney's comments, in a White House interview Tuesday with a conservative radio talk-show host, appeared to reflect the Bush administration's view that the president has the constitutional power to do whatever he deems necessary to fight terrorism.

Shown in the photograph is a Cambodian waterboard. The Cambodians knew they couldn't expect to get any reliable information from its victims. They used it to extract confessions.
Posted by The Mound of Sound at 11:12 AM