The Best Business in Baghdad 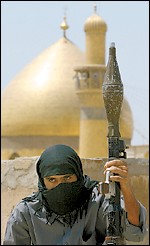 The idea behind the Bush "surge" in Baghdad is to bring American troops into direct co-operation with their Iraqi counterparts to put down sectarian violence that is plaguing the Iraqi capital.

This latest adventure is opposed in congress, mainly by the Democrats. The Republicans have voiced their dissatisfaction by have largely failed to follow that up with support for Democratic initiatives. It is widely reported, however, that the Republicans won't stay neutral for long and may stage their own revolt if the surge shows no real success by the end of the summer.

The greatest challenge facing the American commanders will be in taming the Shiite militias. The central government of al-Maliki is Shia dominated and has already indicated it wants the US to deal with the Sunni insurgents, in effect doing the Shia's work for them.

Success or failure of the surge will be heavily influenced, if not completely dependent, upon the degree of co-operation the Americans get from the Iraqi forces. A report in The Guardian reveals a picture of conditions on the ground in Baghdad that are anything but helpful. The article is an interview with Fadhel, a 26-year old commander in al-Sadr's Mahdi Army.

Fadhel described how his men tracked and seized three Sunni men suspected of attacking Shiites: "I followed the group for weeks and then one of them crossed the bridge to Karrada [a Shia district]. We first informed a nearby Iraqi army checkpoint that we were arresting terrorists then we attacked them and put them in the boots of the cars. We only have six to seven minutes when we grab someone - we have to act quickly, if he resists we shoot him."

"In this case, he said, the men were taken to Sadr City, the Shia slum to the north-east of Baghdad, where they were interrogated by a "committee" which ordered their execution. "We ask the families of the terrorists for ransom money," said Fadhel. "And after they pay the ransom we kill them anyway."

"Kidnapping in Baghdad these days is as much about economics as retribution or sectarian hatred. Another Shia man close to the Mahdi Army told me: "They kidnap 10 Sunnis, they get ransom on five, and kill them all, in each big kidnap operation they make at least $50 000, it's the best business in Baghdad."

Fadhel described the intimate collaboration between the Shia militia and the Iraqi Army, "...especially the commandos of the Iraqi interior ministry. He says the Mahdi Army often uses these official forces in conducting its own operations against Sunni "terrorists".

"'We have specific units that we work with where members of the Mahdi Army are in command. We conduct operations together. We can't ask any army unit to come with us, we just ask the units that are under the control of our men.'

"'The police are all under our control, we ask them to help or inform them that shooting will take place in a street and it involves the Mahdi Army, and that's it.'

"In one operation Fadhel took part in last summer, Iraqi interior ministry commandos attacked a Sunni area in Dora called "Arab Jubour". The raid involved 28 pickup trucks, he told me. Of them 16 were ministry of interior, the rest Mahdi Army.

"The new Bush plan to secure Baghdad gives a major role to the Iraqi army and police units in securing Baghdad. Few in the city expect that these predominantly Shia forces will seriously challenge their fellow Shia.

"As the discussions for the new security plan were continuing, an Iraqi Shia official who belongs to another party told me: 'We know that Moqtada [al-Sadr] and his men are responsible for all this mess but what can we do? We can't attack them, we can only talk to them. Its like having a mentally ill relative - you can't just throw him in the street.'"
Posted by The Mound of Sound at 5:31 AM