Muqtada Returns to the Fold 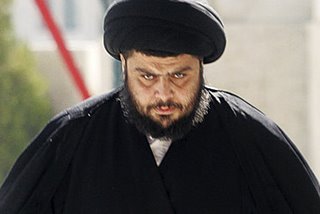 The dance continues. Iraqi legislators loyal to radical Shiite leader Muqtada al-Sadr are ending their boycott and returning to their seats in government. There are 30-lawmakers loyal to Sadr who also has six ministers in the Maliki governments 38-member cabinet.

Observers suspect the move is intended to shore up prime minister al-Maliki while returning Sadr's block to influence in advance of the American "surge" in Baghdad.

It has also been reported that Sadr, fearing an American raid, has moved his family to a place of refuge.
Posted by The Mound of Sound at 8:05 AM