And He Was Expecting ...What? 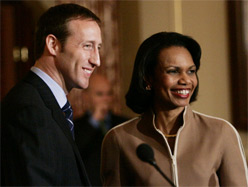 Peter MacKay seems to be traipsing along in the wake of his American Idol, Condoleeza Rice. She went to the Middle East so he packed his toothbrush and hopped a flight there too. It looks like our foreign affairs minister decided to exercise some of Canada's new found muscle on the international scene, a dollop of the enormous vat of global political capital earned for us by his highly principled boss, Stephen Harper.

So the air must have been rife with the aroma of power diplomacy when MacKay met with Palestine president Mahmoud Abbas to share a bit of Tory enlightenment with the vulgar Arab, right? Well, not exactly.

Abbas did meet with MacKay. They were supposed to have a chat this weekend but Abbas decided he'd rather be in Damascus to meet with Syrian president Haddas instead. He didn't snub Canada though. He managed to squeeze MacKay in - and out - yesterday, somewhere between the falafel and the delicious dates.

What actually happened? Did we manage to iron the creases out of the crumpled Roadmap? Here are a few insights from The Globe:

"In an interview before the meeting, Rafik Husseini, Mr. Abbas's chief of staff, said that because of the 10-month-old boycott, the Palestinian side knew little about the year-old Canadian government.

"Canada is not a big player in general and because, of course, of what has happened with the [economic] siege and with the no-talk policy towards Hamas, we cannot tell the difference between the old and the new government,' he said.

"Mr. Husseini's impression was that Canada has become less friendly to the Palestinians under Prime Minister Stephen Harper. He didn't attend the Amman talks, but said that had he been in the room, he would have confronted Mr. MacKay over Canada's pro-Israel swing under Mr. Harper, and the fact Canada's policies in the region are now almost indistinguishable from those of the United States.

"Following the 45-minute meeting at Mr. Abbas's Amman residence, Mr. MacKay said he had come to the region largely to listen "and to look for ways we can make a positive contribution." It was strikingly similar to the justification U.S. Secretary of State Condoleezza Rice gave for her trip to the region last week, a visit that was widely ridiculed as having created little other than some photo opportunities."

No word yet on whether Peter's truncated schedule is going to let him catch up with Condi but wouldn't that be cute? Ah Peter, make the trip worthwhile - bring home some of that terrific hummus.
Posted by The Mound of Sound at 5:58 AM