Too Many Enemies to Keep Them Straight? 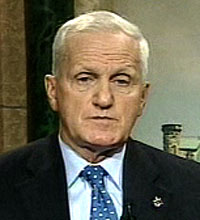 Bush keeps linking Saddam to al-Qaeda so it's not surprising that Canada's defence minister, Gord O'Connor, links the Taliban to the World Trade Centre attacks of 11 September, 2001.

"When the Taliban or Al Qaeda came out of Afghanistan, they attacked the twin towers and in those twin towers, 25 Canadians were killed," O'Connor said to applause from a crowd in Edmonton.

Now, just to clarify things, neither O'Connor nor anyone else has any evidence that the Taliban were in on the 9/11 attacks. Among the nearly two-dozen terrorists involved, there wasn't a single Afghan. They were mainly Saudis, all of them Arabs. The Taliban didn't come out of Afghanistan to attack anything Gord, sorry.

What the Taliban did, or rather failed to do, was to oust al-Qaeda from Afghanistan after they had given so much help in ousting the Soviet Union. Not to make excuses, but at the time of the WTC attacks, the Taliban were locked in a civil war with the Northern Alliance and not looking to make any new enemies.

Things are different today, of course. The Taliban and al-Qaeda have bonded now that they are prepared to fight a common enemy - Karzai and us. No one's suggesting they're not fair game because they certainly are. They're our enemy at the moment.

Is this a distinction without a difference? Not at all. You see, the Taliban aren't going away anytime soon. Hamid Karzai knows that. The president of Afghanistan is constantly trying to reach an accommodation with the Taliban because Mr. Karzai understands they have to be brought into the process if there is to be lasting peace in Afghanistan.

Maybe our focus shouldn't be on blaming the Taliban for 9/11 but on trying to find ways to drive a wedge between them and al-Qaeda. Their objectives and interests are in many ways different and it would be useful to realize that. It is al-Qaeda that quests for a return of the Caliphate, a greater Islamic empire.

Sure we have to fight the Taliban but let's not forget that the prime target must be al-Qaeda.
Posted by The Mound of Sound at 9:08 AM

One of the main reasons the Taliban gave refuge to bin Laden stems from the tenets of Pashtunwali; a code of conduct deeply entrenched in the Pashtun culture. Sadly, few people know what it is, what is says and why it makes a difference in how we ought to deal with Pashtuns.