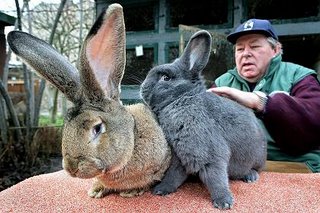 The answser is bunnies - very, very big bunnies. Karl Szmolinsky breeds the world's biggest wabbits. They weigh in at around 10.5 kgs. or about 23 lbs.

Szmolinsky says each rabbit yields about 7 kgs. of meat, something that most North Koreans don't see these days.

He was initially approached by the North Korean embassy and asked whether he would sell a few of his megabunnies and help set up a breeding programme in the communist state. He has sent 12 of his rabbits to Korea so far which he says is enough to breed 60-more within a year.
Posted by The Mound of Sound at 11:53 AM