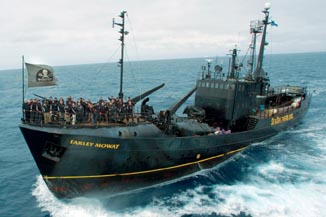 An intriguing hunt is on in the Antarctic's Southern Ocean. Actually there are two hunts underway on that ocean. It's where Japanese ships are hunting whales and where the Sea Sheperd's "Farley Mowat" is on the hunt for the Japanese whalers.

The government of New Zealand has released video taken from a RNZAF Hercules of the whalers in action, harpooning and butchering whales but won't say where the ships are at.

Sea Shepherd leader, Paul Watson, believes the US Naval Intellingence is helping the Japanese elude Greenpeace and Sea Shepherd ships. That's led Watson to post a $25,000 bounty for the co-ordinates of the whaling fleet.

Watson has threatened to ram and sink the Japanese vessels if he can only find them.
Posted by The Mound of Sound at 11:40 AM