The Taliban Board of Education? 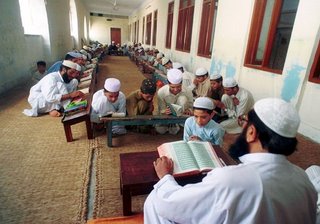 The Associated Press reports that the Taliban have decided to establish a school system in those regions of Afghanistan now under their control.

The schools, which supposedly will open for business in March, are to open in the provinces of Kandahar, Zabul, Uruzgan, Helmand, Nimroz and Farah and will teach Sharia or Islamic education using textbooks formerly used when the Taliban were in power.

A Taliban spokesman claims the initiative is being undertaken with the approval of local, tribal elders and will, eventually, offer classes to girls also.

Education has become a hotpoint issue in the insurgency. Since the Taliban were ousted there has been a fivefold increase in school enrollments in Afghanistan. The insurgents have responded by 200 arson attacks on schools in the last year alone and the murder of 20-teachers.

Meanwhile, the Taliban flared up again yesterday in southern Afghanistan which has enjoyed weeks of relative peace. In one incident, Canadians manning a highway checkpoint engaged in a 3-hour firefight against Taliban attackers. The insurgents were finally driven off by heavy artillery, tanks and air support.
Posted by The Mound of Sound at 8:29 AM

Yikes ! More madras recruiting for the Taliban? I wonder when we'll begin to realize the power that these schools have.

Hardly surprising given that the word talib, or in the plural, taliban, means... um... well, 'student' or 'students.'