Crime Capital of the World? The Vatican 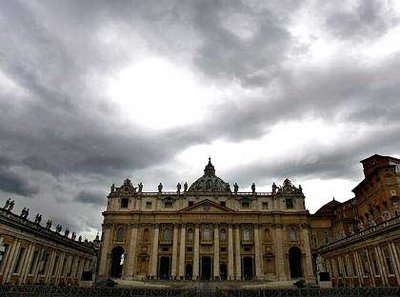 Of course, it's all a matter of how you work the numbers but, on a per capita basis, the Vatican is inarguably the crime capital of the world.

Before you go blaming the Pope and his gang, in the main they're not the lawbreakers but, according to Spiegel, the numbers speak for themselves:

"The Vatican's attorney general Nicola Picardi released the astounding statistic at the start of 2007: The tiny nation's justice department in 2006 had to contend with 341 civil and 486 criminal cases. In a population of 492, that measures out to 1.5 cases per person -- twenty times the corresponding rate in Italy.

"By this measurement at least, crime is soaring in the Vatican in spite of a security force that would put a police state to shame. The seat of the Catholic Church has one Swiss guard for every four citizens, not to mention museum guards and police assigned to the Vatican by Italy.

"Picardi did say that most criminal cases were matters of pickpocketing or purse-snatching."
Posted by The Mound of Sound at 9:23 AM