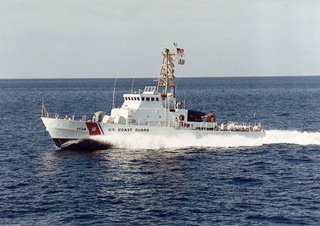 It's no secret that America's military services are stretched thin, some almost to the breaking point, due mainly to the quagmire that is Iraq. Some soldiers are now being sent back for their third, even their fourth tours of duty.

A lesser known victim of the Global War Without End on Terror has been America's War on Drugs. Once the lead service in defending America's borders against drug smugglers, the military has sharply reduced its role on drug interdiction.

According to a report in the LA Times, the cuts have been substantial and have left significant gaps in America's interdiction efforts:

"Internal records show that in the last four years the Pentagon has reduced by more than 62% its surveillance flight-hours over Caribbean and Pacific Ocean routes that are used to smuggle cocaine, marijuana and, increasingly, Colombian-produced heroin. At the same time, the Navy is deploying one-third fewer patrol boats in search of smugglers.

"The Defense Department also plans to withdraw as many as 10 Black Hawk helicopters that have been used by a multi-agency task force to move quickly to make drug seizures and arrests in the Caribbean, a major hub for drugs heading to the United States.

"And the military has deactivated many of the high-tech surveillance "aerostats," or radar balloons, that once guarded the entire southern border, saying it lacks the funds to restore and maintain them."
Posted by The Mound of Sound at 11:13 AM