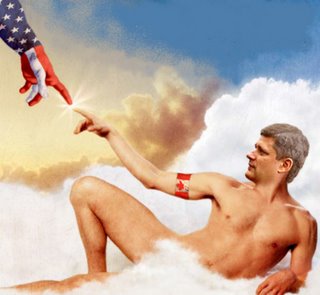 It's no wonder Stephen Harper wants to go after Stephane Dion with attack ads. Stevie needs all the distraction the Reform Conservative's money can buy.

Steve wants us to believe that he's all about the environment. Sounds a tad strange for a guy who only recently talked about "so-called greenhouse gases" but, hey, he might have just needed a bit more information, right?

Well maybe there's a lot more to Stevie's desperation than meets the eye. Maybe Stevie has a few skeleton's in his global warming closet. Canadian Press reports about a 2002 Harper letter on Kyoto that's now making the circuit among Liberals and, we hope, may soon be coming to a TV screen near you:

"A prime minister who now promises to fight climate change once ridiculed the Kyoto accord as a money-sucking socialist scheme and said he would battle to defeat it.

"Stephen Harper derided the global treaty and questioned the science of climate change in a 2002 fundraising letter sent to members of his now-defunct Canadian Alliance party. With polls showing the environment is a top priority with voters and Harper keen to bolster his environmental credentials, the letter could prove embarrassing.

"Kyoto is essentially a socialist scheme to suck money out of wealth-producing nations," says the letter, signed by Harper.

"Implementing Kyoto will cripple the oil and gas industry, which is essential to the economies of Newfoundland, Nova Scotia, Saskatchewan, Alberta and British Columbia . . .

"Workers and consumers everywhere in Canada will lose. THERE ARE NO CANADIAN WINNERS UNDER THE KYOTO ACCORD."

He also blasted the treaty for targeting carbon dioxide - which he said is "essential to life" - and played down the science of climate change as "tentative and contradictory."

Harper went on to promise a "battle of Kyoto" in hope of defeating the Chretien Liberals' efforts to implement the treaty legislation in the House of Commons.

"But we can't do it alone. It will take an army of Canadians to beat Kyoto, just as it did to beat (the) Charlottetown (constitutional accord)," he wrote.

What does this tell you? How 'bout that Steve is a Weasel (capital "W") and a pathetic opportunist whose heartfelt views he's ready to toss aside like confetti to win votes. I've said it before and I'll say it again: Creep.

When it comes right down to it, Stephen Harper has the integrity of a toilet brush.
Posted by The Mound of Sound at 7:35 PM

This is somewhat off-topic, but I wanted to point an excellent article of Climate Change that I suspect you'll enjoy: here.