Not Ready for Prime Time 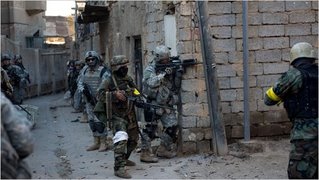 The idea behind the Baghdad "surge" is for American troops to back up Iraqi forces in cleaning out neighbourhoods infested with Sunni and Shiite militias. It sounds good in theory but the theory assumes the Iraqi army forces are up to the job. Two reporters from the Herald Tribune accompanied a US force in Baghdad today and learned that things aren't what they are assumed to be:

"In a miniature version of the troop increase that the United States hopes will secure the city, American soldiers and armored vehicles raced onto Haifa Street before dawn to dislodge Sunni insurgents and Shiite militias who have been battling for a stretch of ragged slums and mostly abandoned high rises. But as the sun rose, many of the Iraqi Army units who were supposed to do the actual searches of the buildings did not arrive on time, forcing the Americans to start the job on their own.

"When the Iraqi units finally did show up, it was with the air of a class outing, cheering and laughing as the Americans blew locks off doors with shotguns. As the morning wore on and the troops came under fire from all directions, another apparent flaw in this strategy became clear as empty apartments became lairs for gunmen who flitted from window to window and killed at least one American soldier, with a shot to the head.

"Whether the gunfire was coming from Sunni or Shiite insurgents or militia fighters or some of the Iraqi soldiers who had disappeared into the Gotham-like cityscape, no one could say.

The commander of the operation, Lt. Col. Avanulas Smiley of the Third Stryker Brigade Combat Team, Second Infantry Division, said, "This was an Iraqi-led effort and with that come challenges and risks. It can be organized chaos."

"Many of the Iraqi units that showed up late never seemed to take the task seriously, searching haphazardly, breaking dishes and rifling through personal CD collections in the apartments. Eventually the Americans realized that the Iraqis were searching no more than half of the apartments; at one point the Iraqis completely disappeared, leaving the American unit working with them flabbergasted."

The mission resulted in one American killed and two Iraqi wounded but the targets, the militiamen and insurgents, simply melted away.
Posted by The Mound of Sound at 5:38 PM