Is Iran Already at War with America? 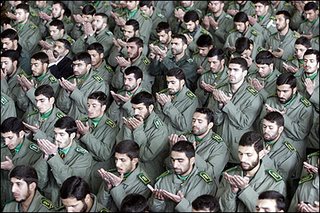 For more than a year there have been credible accounts of American special forces operating within Iran, scouting Iran's nuclear facilities and engaging Iranian dissidents.

Now, according to Time, the Iranians may be playing the same game against the Americans in Iraq. Former CIA agent Robert Baer asks, "Are the Iranians out for revenge?" and speculates they are indeed:

"The speed and level of chaos in Iraq is picking up fast. An apocalyptic cult came uncomfortably close to taking Najaf, one of Shi'a Islam's most holy cities, and murdering Grand Ayatollah Sistani. Sistani is the neo-cons' favorite quietist Shi'a cleric, the man who was supposed to keep Iraq's Shi'a in line while we went about nation building. And then, on Sunday, Iran's ambassador to Baghdad told the New York Times that Iran is in Iraq to stay, whether the Bush Administration likes it or not.

"And that's not the worst of it. American forces still hold five members of Iran's Islamic Revolutionary Guard Corps. Arrested by American forces in Erbil on Jan. 11, the Administration has accused the five IRGC members of helping the Iraqi opposition kill Americans."

Baer reports that, within Iraq, there is plenty of speculation that the commando-style raid in Karbala on January 20th in which five American soldiers were kidnapped and later found executed may have been the work of Iran's Islamic Revolutionary Guard Corps or IRGC. The theory goes that the Iranians killed the five Americans in retaliation for the arrest by the Americans of five IRGC members in Erbil days earlier.

"...we should count on the IRGC gearing up for a fight. And we shouldn't underestimate its capacities. Aside from arming the opposition, the IRGC is capable of doing serious damage to our logistics lines. I called up an American contractor in Baghdad who runs convoys from Kuwait every day and asked him just how much damage."Let me put it this way,"he said."In Basra today the currency is the Iranian toman, not the Iraqi dinar."He said his convoys now are forced to pay a 40% surcharge to Shi'a militias and Iraqi police in the south, many of whom are affiliated with IRGC.

"Mindful of the spreading chaos in Iraq, President Bush has promised not to take the war into Iran. But it won't matter to the IRGC. There is nothing the IRGC likes better than to fight a proxy war in another country."
Posted by The Mound of Sound at 6:26 PM