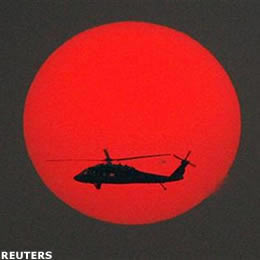 "We will not allow hegemony of a hostile regime to have power over this area."

That warning came from US ambassador to Iraq, Zalmay Khalizad this weekend. His remarks were directed at Tehran and prompted by Iran's rapidly growing, and probably inevitable, influence in Iraq.

The US is trying to chaperone Iraq, keeping its courtship by Iran under strict control lest it lead to hanky-panky. Howevere Shiite-controlled Iraq is showing signs that it rather likes Shiite-Iran's attentions.

George Bush has issued an order to US troops authorizing them to kill or capture Iranian agents in Iraq who may be doing things hostile to the American forces. Does this mean it's open season on Iranians who have the bad luck to get swept up by GI's? Hard to say.

One thing is clear. If Washington was hoping to intimidate Iran, it's not working. Tehran has since announced initiatives to train Iraqi military forces and to undertake reconstruction projects that have fared poorly under the occupation. The Baghdad government seems to be welcoming the offers from one of America's designated "Axis of Evil" charter members.

"The increasingly common arrangement for sick or wounded Iraqis to receive treatment in Iran is just one strand in a burgeoning relationship between these two Persian Gulf countries. Thousands of Iranian pilgrims visit the Shiite holy cities in southern Iraq each year. Iran exports electricity and refined oil products to Iraq, and Iraqi vendors sell Iranian-made cars, air coolers, plastics and the black flags, decorated with colorful script, that Shiites are flying this week to celebrate the religious holiday of Ashura.

"Each day, Iran provides 1,000 tons of cooking gas, about 20 percent of the Iraqi demand, and 2 million liters of kerosene. Iran exports electricity through Iraq's Diyala province and plans to quadruple the amount with new projects, Iraqi officials say.

"Iran has also extended a $1 billion line of credit to Iraq to help fund reconstruction and rebuilding. When Iraqi President Jalal Talabani and his delegation of ministers visited Iran in November, he asked for more help and said Iraq 'would like to expand our relations in every field with the Islamic Republic of Iran.'

"'The economic power between the two countries, it's enormous,' said Hassan Kazemi Qomi, Iran's ambassador to Iraq. 'We can help them in technical issues and engineering. We have a lot of experience in building roads and airports.'

"Iran has driven a wedge between Iraq and the United States. Last month, when U.S. troops seized two Iranian officials inside the Baghdad compound of Abdul Aziz al-Hakim, the leader of SCIRI, the Iraqi government intervened and the United States freed them. After U.S. troops seized five more Iranian officials from the liaison office in Irbil, the Iraqi government again appealed for their release -- so far unsuccessfully -- saying the men worked in an approved office providing consular services.

"Some analysts say the violence and instability in Iraq attract more Iranian involvement, not less, as Iran positions itself to be on the winning side of a sectarian war.

"'The whole Gulf system is turned upside down, and everybody is trying to figure out how they situate themselves in it,' said Ray Takeyh, an Iran expert at the Council on Foreign Relations, referring to traditional relationships in the Persian Gulf region. Iranian support is 'part of the program of strengthening the Shia community to resist and expand its influence, and become a successful combatant in a civil war.'"
Posted by The Mound of Sound at 9:42 AM