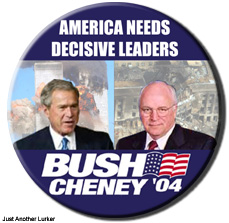 The US president has pretty much used up the month of January depicting himself as a Democrat-friendly moderate, a changed man. His actions show something else entirely.

"In his State of the Union speech, Mr. Bush stuck to his ill-conceived plans for Iraq, but at least admitted the situation was dire. He said he wanted to work with Congress and announced a bipartisan council on national security.

"That lasted a day. By Wednesday evening, Vice President Dick Cheney was on CNN contradicting most of what Mr. Bush had said. We were left asking, once again, Who exactly is running this White House?

"While Mr. Bush has been a bit more forthright lately about how badly things have gone in Iraq, Mr. Cheney spoke of “enormous successes” there and refused to pay even curled-lip service to consulting Congress. Whatever votes Congress takes on Iraq, Mr. Cheney said, “it won’t stop us.”

"All of that was distressing enough. But in Friday’s Times, Adam Liptak gave an account of the way the administration — after grandly announcing that it was finally going to obey the law on wiretapping — is trying to quash lawsuits over Mr. Bush’s outlaw eavesdropping operations by imposing outrageous secrecy and control over the courts.

"Justice Department lawyers are withholding evidence from plaintiffs and even restricting the access of judges to documents in cases involving Mr. Bush’s decision to authorize the warrantless interception of e-mail and phone calls. In one suit, Justice Department lawyers tried to seize computers from the plaintiffs’ lawyers to remove a document central to their case against the government.

"In response to these and other serious concerns, the Justice Department offered only the most twisted excuses, which a federal judge rightly compared to “Alice in Wonderland.”

"When government lawyers tried to take back a document that has circulated around the world, the judge asked a Justice Department lawyer, “Who is it secret from?” The answer: “Anyone who has not seen it.”

I doubt the Frat Boy president can change, especially when he's torn between his disingenuous rhetoric and his subversive vice-president who is plainly charting his own course for this administration. Bush and Cheney are wasting no time in challenging the will and resolve of the Democratic congress. If the Democratic Party majorities in the House and Senate don't push back, it will herald two more years of autocratic rule, incompetence, deceit and undemocratic secrecy for George Bush.
Posted by The Mound of Sound at 4:59 AM