Is the PQ Collapsing Under Boisclair? 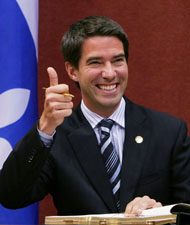 Jean Charest must love, not romantically of course, Parti Quebecois leader Andre Boisclair. The latest opinion polls show the PQ has fallen dramatically from a 20-point lead over the provincial Liberals to now trail the Libs by a few points.

Boisclair is being blamed for his party's misfortunes. Boisclair is openly gay. He has owned up to past cocaine use. That much the PQ might have weathered had their leader not chosen to go out of his way to alienate core supporters.

In a gaffe that upset Roman Catholics, Boisclair suggested the crucifix has no place in Quebec's National Assembly. He's taken swipes at unions, a major part of the PQ base. And then he took part in a spoof of Brokeback Mountain that featured George Bush and Stephen Harper in the leading rolls.

The knives are coming out from old-school PQ'ers such as Bernard Landry who may just be waiting for an opportunity to replace the fumbling upstart. Meanwhile, if the PQ numbers keep falling, the Charest Liberals might just have a chance of retaining power.
Posted by The Mound of Sound at 8:47 AM

Charest will win the next election without a doubt.
He is master campaigner and Quebec has a 40 year history of giving the parties 2 mandates.
Boisclair will hang on until the election but he's done.

It's too bad that Charest will win.
He's bought votes lately and certainly shown to be worse with the economy than the previous PQ under leaders...
And of course Boisclair has not helped himself....