The Scent of Fear 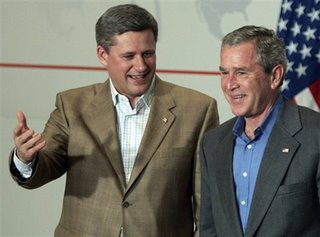 It speaks volumes that the Reform Conservatives are ready to spend upwards of a million dollars of their own cash to slam Stephane Dion. They've singled out the Liberal leader with nary a word for Jack Layton or Gilles Duceppe. Dion, in their eyes, stands alone.

The Harpies are obviously bent on using paid ads to neutralize Dion on the environmental front. Why should they have to pay if (a) they're the government and (b) they've got a legitimate point to make?

Put it down to fear. They're afraid that Stephane Dion will take control of the foremost issue of concern to the Canadian public. Why should they be afraid? Ah, there's the question. Are they afraid because Dion is some sort of alchemist who controls knowledge they don't have? Not likely because he doesn't. Are they afraid because the opposition leader may expose their feint on "so called greenhouse gases" for what it is? Bingo.

I heard an ad today in which some "hip" young people were supposedly awed by Stephen Harper's initiative for renewable energy - ethanol. Of course the voices were those of actors and that much was obvious. What was less obvious is Harper's resolute intention not to let any of this environmental crap get in the way of the "almighty dollar" value of the Tar Sands. That's his Achilles' Heel and that's why he's so intent on attacking Dion.

Sorry Steve, you're still trying to protect the Klan while claiming you're all about civil rights. I guess, given your agenda, attacking someone else is an awful lot better than doing something yourself. You've seen your idol, George Bush, use this bait and switch routine for years. Creep.

You had better watch out, Steve. We're not nearly as gullible as the Nascar crowd down south. In fact we can already smell the scent of fear.
Posted by The Mound of Sound at 7:18 PM