A Long Overdue Question is Asked 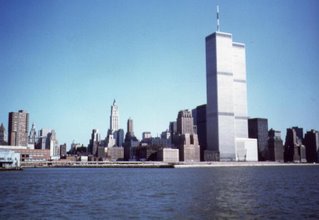 It's taken more than five years to come up but, finally, John Hopkins professor David Bell writing in the LA Times has asked it, "Was 9/11 really that bad?"

"IMAGINE THAT on 9/11, six hours after the assault on the twin towers and the Pentagon, terrorists had carried out a second wave of attacks on the United States, taking an additional 3,000 lives. Imagine that six hours after that, there had been yet another wave. Now imagine that the attacks had continued, every six hours, for another four years, until nearly 20 million Americans were dead. This is roughly what the Soviet Union suffered during World War II, and contemplating these numbers may help put in perspective what the United States has so far experienced during the war against terrorism.

"Has the American reaction to the attacks in fact been a massive overreaction? Is the widespread belief that 9/11 plunged us into one of the deadliest struggles of our time simply wrong? If we did overreact, why did we do so? Does history provide any insight?

"...although Islamist extremists can certainly do huge amounts of harm around the world, it is quite different to suggest that they can threaten the existence of the United States.

"Yet a great many Americans, particularly on the right, have failed to make this distinction. For them, the "Islamo-fascist" enemy has inherited not just Adolf Hitler's implacable hatreds but his capacity to destroy. The conservative author Norman Podhoretz has gone so far as to say that we are fighting World War IV (No. III being the Cold War).

"Even if one counts our dead in Iraq and Afghanistan as casualties of the war against terrorism, which brings us to about 6,500, we should remember that roughly the same number of Americans die every two months in automobile accidents.

"So why has there been such an overreaction? Unfortunately, the commentators who detect one have generally explained it in a tired, predictably ideological way: calling the United States a uniquely paranoid aggressor that always overreacts to provocation.

"Yet as the comparison with the Soviet experience should remind us, the war against terrorism has not yet been much of a war at all, let alone a war to end all wars. It is a messy, difficult, long-term struggle against exceptionally dangerous criminals who actually like nothing better than being put on the same level of historical importance as Hitler — can you imagine a better recruiting tool? To fight them effectively, we need coolness, resolve and stamina. But we also need to overcome long habit and remind ourselves that not every enemy is in fact a threat to our existence."
Posted by The Mound of Sound at 8:31 AM

Bravo! It's high time that someone (else) said it!

The critical point is not the body count - it's that 9/11 was essentially an act of war against the U.S.

There can be real debate about whether America's responses to 9/11 were correct, but there can be no doubt that any country that does not respond in some meaningfull way to an act of war encourages further attacks, and jeopardizes its sovereignty and ultimately its very ability to exist.

It was not to avenge past acts that was critical, but to discourage future acts. The message Bush wished to send was this: Attack America and you will be hounded to the ends of the earth for as long as you live.

Are you trying to assign a value to human life? If sombody kills 1 person or 10 people, they still deserve to go to jail. Give me a break, this post makes me sick.

In the taking of human life, as in just about everything, perspective is always relevant. No one is suggesting that killers don't deserve punishment, of course they do. However the murder of 3,000 people by a gang of mainly Saudi criminals hardly justifies the takihg of scores of thousands of lives of innocent Iraqis. There being no causal connection, that too can easily be construed as murder only on a much grander scale. Yes, I do assign a value to human life. 100,000 lives have a proportionately higher value than 3,000 lives. Your suggestion it doesn't makes me sick. Now we're even, eh?