A Visit Netanyahu May Come to Regret 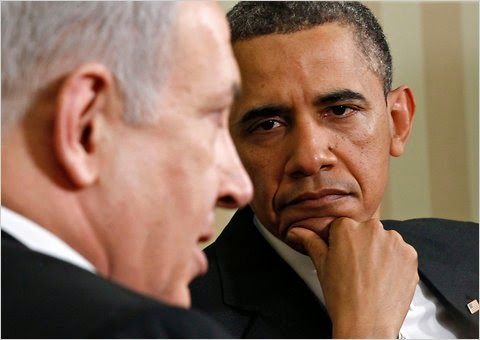 Joe Biden won't commit to being there.  The Democratic caucus might give it a pass too.  The "it" is Israeli prime minister Benjamin Netanyahu's address to Congress on 3 March.

Democrats have had to balance publicly supporting Israel with backing Obama, who’s trying to close a deal with Iran to curb its nuclear programs over vehement opposition from Netanyahu, who has expressed concerns that the U.S. president is being naive. Negotiations are facing a deadline at the end of March for a political framework.

The speech was devised by House Speaker John Boehner (R-Ohio) and Israeli Ambassador Ron Dermer to provide Netanyahu a prominent Washington platform to warn about the dangers of the proposed deal with Iran. But it also appeared to be based on an Israeli perception that Obama was weakened after midterm elections gave control of both houses of Congress to Republicans, and timed to take place just two weeks before Netanyahu faces reelection on March 17 — and footage of American officials applauding him couldn’t hurt his prospects.

But that reading of Obama seems not to have been updated since November, when Obama’s own poll numbers started moving up again, and — though Netanyahu’s Likud Party is still leading in Israeli polls — miscalculated the backlash in Israel from putting his relationship with the American president on the line.
Netanyahu’s already been denied an Oval Office meeting with Obama. Secretary of State John Kerry has no plans to meet with him while he’s in town, a State Department official told POLITICO on Tuesday.

The showdown puts the White House in a position it isn’t much used to with Netanyahu: appearing to have the political edge. Throughout Obama’s time in office, the prime minister has elbowed his way into American politics to corner and game the president. This time, without much nudging from the White House beyond a complaint about breached protocol, Netanyahu’s speech has sparked criticism across Washington and in the American Jewish community — as well as among diplomats, Israeli officials and domestic political opponents who include his own former ambassador to Washington.

The president and his aides won’t tell Democrats to skip the speech. But they aren’t telling Democrats to go, either.

“We defer to Democratic members if they’d like to attend or not,” a White House aide said Tuesday.

Biden’s office wouldn’t comment on the decision-making process about attending the speech. As president of the Senate, he usually takes a seat beside Boehner on the podium behind the lectern for addresses by foreign leaders.

Though some may abandon the threat, as of Tuesday, many Democrats on the Hill — including several Jewish members — said they’re likely to leave the prime minister looking at some empty seats.

I wonder if this is finally going to be seen as too much blatant interference within American politics by a foreign nation, even an ally like Israel for the wider American public. Israel and especially the hard right Likudites have been able to play upon that for a couple of decades now with impunity, it is, and I really hope so, possible this is that final step too far and perhaps will in time weaken the power the Israel lobby has over American foreign policy.

It is also a rather stupid act for Bebe given that while the GOP may temporarily hold Congress in both Houses, the 2016 elections are looking more like a Dem probability, especially if Hillary Clinton runs, and to alienate (and more importantly act in a manner in which they can take open offence without being branded anti-Semite for it) the Dem power-structure in this way can really backfire over the longer run for him and his nation. Not to mention that it has been noted that while the GOP has been doing well in off year election cycles when it comes to the Presidential years more and more the Dems have been making stronger and stronger showings in the Congress and over time regain control.

It also seems a bit short-sighted in Boehner's part to me as well, he is clearly acting in a manner beyond the traditional bounds of American division of power/responsibilities between the branches, so much so that it may well penetrate the usual indifference towards government in the wider public, and further show the GOP becoming an increasingly out of touch, out of control increasingly extremist party unfit for the role of governing. Not saying I am sure it will have that effect, only that it risks it. So I have to agree with your post title, this may well become the visit Bebe regrets, but also that Israel more broadly may as well.

It is never wise for any foreign power no matter how friendly to show too much influence and feeling of right to upbraid the American President, especially from the floor of their Congress. Some lines are too bright not to need to avoid, and I have to wonder whether this is one of them. I've long believed that Israel has had too much influence over the national security policy of the USA thanks to the efforts of the very powerful Israel lobby within the US power-structure. Perhaps we are finally going to see some correction of that. One can hope, because given the power of America in the world it is not a good thing for any other nation to have that kind of disproportionate ability to shape American power for their own ends. Which Israel clearly has been doing for some time now, and it has not helped stabilize the global situation, no, if anything I'd say it has clearly been a significant destabilizing effect overall.

It will be interesting to see how this all shakes out.

Shortsighted? Republicans? They've been off their nut since well before the impeachment of Bill Clinton blew up in their faces. The astonishing thing is that the American public has been so powerfully conditioned, truly worked over, that they'll hand these guys a majority in both houses of Congress.

As for Bibi, it's looking like he has overplayed his hand on this one. He's certainly lost control of the narrative. The focus from here on in will be on the Democrats, not Likud, not the Republicans. Hard to see how Netanyahu or Boehner can spin this one. It virtually demands reflection on Israel's pushy relationship with the Greatest Nation on Earth(tm).

I agree, the GOP Clinton Impeachment insanity was where they really started going off the rails of reality. It also gave us such lovely voices like Ann Coulter, who got her start as one of the GOP House Representative lawyers trying to nail Clinton. As you say, the American public has been well conditioned, but then bread and circuses are nothing new, nor the fact that in powerful prosperous nations over time people start disengaging from political processes because they do not see the need to be as concerned/involved. When you are talking about what is clearly the most powerful nation on the planet though that is a very dangerous and unhealthy situation indeed. I keep hoping that sooner or later this breaks down there, but I am not one to live/bet on hope alone, I know WAY too much history to ever be that, shall we say, idealistic.

Anyways, I have e bit of a busy day so take care and thanks for being one of the better blogs on security and foreign affairs issues out there.

We need to remember exactly why Netanyahu is doing this. He wants the Republican Congress to implement new sanctions against Iran for the sole purpose of derailing Obama's negotiations on the nuclear problem. It's widely thought that any more US sanctions will kill off the entire process. That's what this manipulative shit (with his Republican collaborators) is after.