The New Frontier is the Russian Border 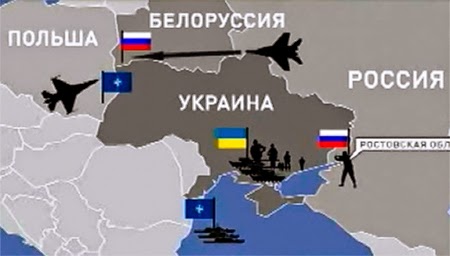 Think of it as the new equivalent of the East German-West German border.  It was across that border that NATO (i.e. US) and Warsaw Pact (i.e. Soviet) forces glared at each other, constantly ready to leap into what probably would have been global annihilation.

We've moved the line.  It's now the border of Russia.

NATO is set to agree on a major boost to its defences in eastern Europe including six bases and a "spearhead" force of 5000 troops in response to what it called Russian aggression in Ukraine.

Secretary General Jens Stoltenberg insisted that the moves likely to be approved by defence ministers meeting in Brussels were purely defensive, but the increased presence on Russia's borders is likely to rile Moscow.

With Eastern European states concerned by the worst tensions with Russia since the Cold War, the bases will be in the alliance's three Baltic states -- Estonia, Latvia and Lithuania, where the alliance has had little presence until now -- plus Poland, Romania and Bulgaria.

The new NATO-Russia front line won't have an invasion-capable force deployed, at least not yet.  Just a few thousand troops for starters.  Yet it's the sort of thing that's quite susceptible to 'mission creep.'  If Putin responds in kind with a NATO-targeted force, we'll be tempted to up the ante and from there it becomes a game of escalation.  Before long you have theatre-nuclear weapons and tank armies pointing at each other across an invisible line and a lot of people holding their breath, hoping that no one does something stupid.

This is so disgusting. What is going on with governments around the world is surely not the thinking of the 21st century. They need to get their heads out of their arses. I am getting really tired of all the sloppy minds of these people. But you know...we just have to shut up and take it all because the big brainless boys need to continue growing their bank accounts...dah, dah and more dah!! Anyong.

That should make it pretty easy to target and destroy Nato enclaves quickly, easily and with no danger to Russian troops.

Sorry, I just wanted to point out that the amount of stuff you put out is staggering. I have gone back and read a lot of past stuff. IT would take me years to get through it I think.

@ Anyong. I think you nailed it with "sloppy minds."

@ Rumley - I dread the scenario you present. It's the sort that has many times backed adversaries into wars not really of their own choosing.

@ Greg - my hobby is learning about the world, scouring my online directories of useful news and opinion sites, and taking online courses mainly from Brit universities on war studies, international law, environmental problems and global food security. After connecting the dots the stuff almost writes itself.

@ PLG - there's a measure of fact in what you write.

The US and most of the world for that matter is run by mindless psychopaths.
What worries me is that all of them are highly incompetent, particularly the US. With nuclear weapons in the mix, NATO's expansion is very scary.

In the context of Canada, Pamela, there's a scary lack of comprehension of what's really going on that extends down from our political classes, to our media brigades and on to the general public.

There are some notable Liberal loudmouths clamouring for war, the Chickenhawk types who couldn't know how to put on a uniform much less tell the dangerous end of a rifle from the butt.

Law and order in the International Community needs to be enforced and I don't mean against rights abuses in individual countries but as in against the real breakers of International Law who at the moment are NATO with their wars for the profit of big oil and military weapons producers. The only way these psychopaths can be reined in is to quit playing in their game. Cut off their funding at its source and that is us because without us nothing happens. How to achieve this mass awakening to bring them to their knees is the question.I have quit except for the consumer taxes on necessary items which has been cut way back. Money is their GOD cut it off.

The big lie. The west did not believe in democracy in Ukraine. So the overthrow of a democratic goverment is seen as the ultimate expression of freedom.