Read Between the Lines 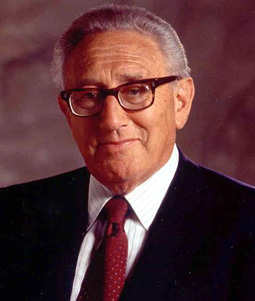 Henry Kissinger is back. The guy who presided over America's final failure in Vietnam has some advice on Iraq for Washington - continue the occupation.

In an editorial in the International Herald Tribune, Kissinger lays out America's ongoing role in Iraq and how it must not withdraw.

Reading between the lines you quickly come up with one glaring omission in Kissinger's logic, the notion that Iraq has become a sovereign state. In fact he presents his arguments from the sole perspective of America's interests, not Iraq's. What Henry Kissinger depicts is an indefinite occupation of Iraq in which the Baghdad government functions more like a bureaucracy to carry out the occupier's instructions.

Kissinger wants to use the Iraq occupation as a means to leverage a regional re-alignment extending all the way to the Palestinian question:

"The creation of a contact group, assembling neighboring countries whose interests are directly affected and which rely on American support. This group should include Turkey, Saudi Arabia, Egypt and Jordan. Its function should be to advise on ending the internal conflict and to create a united front against outside domination.

"Parallel negotiations should be conducted with Syria and Iran, which now appear as adversaries, to give them an opportunity to participate in a peaceful regional order.

"Both categories of consultations should lead to an international conference including all countries that will have to play a stabilizing role in the eventual outcome, specifically the permanent members of the UN Security Council as well as such countries as Indonesia, India and Pakistan.

"A balance of risks and opportunities needs to be created so that Iran is obliged to choose between a significant but not dominant role or riding the crest of Shia fundamentalism. In the latter case, it must pay a serious, not a rhetorical, price for choosing the militant option.

"In all this, the United States cannot indefinitely bear alone the burden for both the military outcome and the political structure."

"American forces are indispensable. They are in Iraq not as a favor to its government or as a reward for its conduct. They are there as an expression of the American national interest to prevent the Iranian combination of imperialism and fundamentalist ideology from dominating a region on which the energy supplies of the industrial democracies depend.

Kissinger proclaims that "withdrawal is not an option" and that the occupation must continue:

"An abrupt American departure will greatly complicate efforts to help stem the terrorist tide far beyond Iraq; fragile governments from Lebanon to the Gulf will be tempted into pre-emptive concessions. It might drive the sectarian conflict within Iraq to genocidal dimensions."

Kissinger's approach has all the blinders of a typically academic solution. It conveniently omits from the equation several practical considerations. America is a democracy and the American voters want their soldiers out of Iraq. In less than two years those same America voters will be electing a new president and a gaggle of congressmen, a lot of them Republicans. Unless the American government can produce a miracle and resuscitate the support of the American people, the American war is going to come to a premature end by 2008, if not sooner.
That's what you call democracy, warts and all.
Posted by The Mound of Sound at 10:29 AM