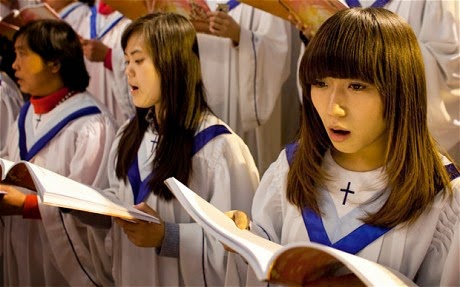 Yeah, I know, it sounds wacky but it's true.  China wants to nationalize as in "Sinicize" the Christian religion as it's practiced in the Peoples Republic.

“The construction of Chinese Christian theology should adapt to China’s national condition and integrate with Chinese culture,” Wang Zuoan, director of the State Administration for Religious Affairs, said at a Shanghai forum on the “Sinicization of Christianity,” according to Chinese state media.

...the officials’ comments last week indicate that the Chinese Communist Party intends to further tighten its grip over Christianity. There are a number of possible targets and motivations for the crackdown.

First, Christianity in general, and Protestantism in particular, has exploded in China in recent years. As The Diplomat has previously noted, China is already estimated to have 58 million Protestants and some believe it will be home to the largest Christian population by 2030. Roughly one half of China’s current Protestants are estimated to belong to underground, illegal churches.
The officials who spoke at the Shanghai forum indicated that this rapid growth was the rationale behind the crackdown. For example, Gao Feng, the president of the China Christian Council, told the audience: “Over the past years, China’s Protestantism has become one of the fastest growing universal churches.” Wang himself noted: “Over the past decades, the Protestant churches in China have developed very quickly with the implementation of the country’s religious policy. In the future, we will continue to boost the development of Christianity in China.”
The growth of religion in China is to be expected given the government’s relaxation of restrictions on it (compared to the Mao era) and the profound socio-economic changes China has undergone since the reform and opening up period began. However, its growth also gives it the potential to act as a unifying force for political opposition to the CCP’s authority. Crucially, Christianity could potentially cut across regional divides in China.
Posted by The Mound of Sound at 1:57 PM