The Citadel Nation - the Militarization of America 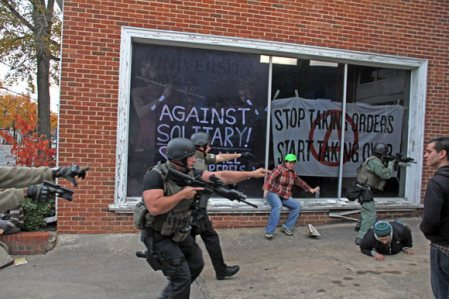 In his 2008 book "Climate Wars", Gwynne Dyer foretold the militarization of the American-Mexican border.  The American military, Dyer wrote, had plans to seal the border against a wave of climate refugees fleeing north out of Central America.  The plan envisioned the use of military-grade, lethal force to keep the horde south of the Rio Grande.

While we haven't yet seen the emplacement of robotic machine gun turrets to sweep a kill zone along the border, the militarization of America continues apace:

The militarization of the police has been underway since 9/11, but only in the aftermath of the six-shot killing of an unarmed teenager in Ferguson, Missouri, with photos of streets in a St. Louis suburb that looked like occupied Iraq or Afghanistan, has the fact of it, the shock of it, seemed to hit home widely.  Congressional representatives are now proposing bills to stop the Pentagon from giving the latest in war equipment to local police forces.  The president even interrupted his golfing vacation on Martha’s Vineyard to return to Washington, in part for “briefings” on the ongoing crisis in Ferguson.  So militarization is finally a major story.

And that’s no small thing.  On the other hand, the news from Ferguson can’t begin to catch the full process of militarization this society has been undergoing or the way America’s distant wars are coming home. We have, at least, a fine book by Radley Balko on how the police have been militarized.  Unfortunately, on the subject of the militarization of the country, there is none.  And yet from armed soldiers in railway stations to the mass surveillance of Americans, from the endless celebration of our “warriors” to the domestic use of drones, this country has been undergoing a significant process of militarization (and, if there were such a word, national securitization).

Perhaps nowhere has this been truer than on America’s borders and on the subject of immigration.  It’s no longer “give me your tired, your poor, your huddled masses yearning to breathe free.”  The U.S. is in the process of becoming a citadel nation with up-armored, locked-down borders and a Border Patrol operating in a “Constitution-free zone” deep into the country.  The news is regularly filled with discussions of the need to “bolster border security” in ways that would have been unimaginable to previous generations.  In the meantime, the Border Patrol is producing its own set of Ferguson-style killings as, like SWAT teams around the U.S., it adopts an ever more militarized mindset and the weaponry to go with it.  As James Tomsheck, the former head of internal affairs for U.S. Customs and Border Protection, put it recently, “It has been suggested by Border Patrol leadership that they are the Marine Corps of the U.S. law enforcement community.  The Border Patrol has a self-identity of a paramilitary border security force and not that of a law enforcement organization.”

Across America (and coming soon to Canada too), the line between democratic law enforcement and martial law is being erased.  It is perhaps the inevitable outcome of neoliberalism in which security is to prevail over constitutional protections for some, a great many although not for all.

I've been away and the first thing done was to check and see if you were back and here you are. Caught you a few times on the other site but it is good to read your back. There is a lot of catch up to do since August 13 or so.
One of things that is a puzzlement is why journalist are not doing their job by questioning events such as this present blog. With all the upheaval around the world, it will not surprise me at all to witness another world wide conflict which will be devastating. I will mention a book later that I am presently reading about the economy past and future. Economic Slavery is in its infancy but just wait; it will make what your present blog is about look like baby cakes with what is to come. Having been born in England during war time, my death will probably take place during war time. That's my negative comment for at least the coming month. Cheers

Your question going to the current state of industrialized journalism is quite valid. Stripping newsrooms of personnel and funding, the path of the last 10-years or more, is a formula for weak reportage. From what I've heard, journalism today has become much more a production process. Journos no longer enjoy the luxury of wandering around, talking to people, cultivating sources. The common narrative of pack journalism is ascendant. Having the "right" story out of an event can trump having the most important story.

"From what I've heard, journalism today has become much more a production process."

10-4. A casualty of two decades of flipping newspapers' ownership by conglomerates and other capitalists. In this time, a $75 million-dollar paper would wind up being sold for maybe $700 million. Problem is, the advertisers' profits haven't gone up, so the papers hit the wall on display charges. Then the web hit. Is it the end of papers, no, local papers do quite well especially with today's mini-web press tech — but overpriced "big" papers have problems.

Similarly with broadcast TV and its love/hate relationship with satellite and cable. Read recently that the US has more internet home consumers than home cable TV service. It seems that the days of Walter Cronkite, Huntley and Brinkley have been replaced by streaked highlight 'blonds' with little brains and large mammaries.

Sure makes you appreciate outfits like Al Jaz and der Spiegel, among others.