Remember, It's the IPCC and It Can Never Tell the Whole Truth 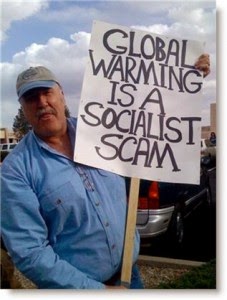 The oft-maligned Inter-governmental Panel on Climate Change is, admittedly, something of a strange bird.  It doesn't conduct climate change research.  It merely collects the research undertaken by universities, government agencies and NGOs, digests the important stuff and then issues advisory reports to governments.

The IPCC reports are usually off-mark.  They sometimes, albeit rarely, overstate conclusions.  Far more often they understate projections of the arrival, severity and duration of climate change impacts.

Contrary to what denialists claim, the IPCC is, if anything, unduly optimistic. For example, until recently the IPCC was predicting that the Arctic Ocean would be seasonally ice-free by the end of this century, about 85-years from now.  The US Navy now predicts a seasonally ice-free Arctic by 2019 at the outside, perhaps as early as 2016.  The Navy's research has the IPCC about 80-years off the mark.

The IPCC reports are the products of a team of "lead authors."  They come to their findings by consensus.  Everybody has to agree and so hold outs can extract compromises on the authors' conclusions.

It's this consensus factor that means it can be important to carefully consider the language that does find its way into the reports.  When the IPCC reports there is an "increasing likelihood" that global warming has already become "irreversible" it's using loaded words.  It's not talking about vague possibilities.  It's speaking of probabilities and it's speaking of probabilities that are increasing, approaching certainty.

When the report speaks of "irreversible" that's also a loaded word.  Irreversible means that global warming is already out of our control.  We can't turn off the tap. We have passed one or more tipping points that lead to runaway global warming, the triggering of natural feedback mechanisms of, as yet, unknown consequence.

So, if the IPCC is to be believed, it's at least somewhat probable and growing increasingly probable that we have triggered irreversible as in runaway global warming.  That's the consensus view.  That's the compromise opinion.

Does that mean we should throw in the towel?  Hardly.  There's much work to do. We need to explore what we can do to safely mitigate this warming, runaway or not.  We need to figure out how people on every corner of this world can live with each other, make common cause.  We need to work out adaptation strategies.

Above all else we need to understand that, while tackling climate change is going to be demanding, expensive and, well, hard, we can still make sure that it's worse for our kids and grandkids, much worse, and that, unfortunately, is easy - for us.

Remember, easy is what got us in this mess in the first place.  It's time to try a different strategy.
Posted by The Mound of Sound at 5:10 PM