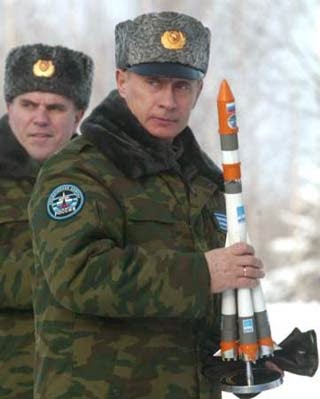 It was last September when Vladimir Putin penned an op-ed about Syria that ran in The New York Times.  The West rejected Putin's views then but now The Washington Post asks whether Putin was right all along.

Putin argued against American airstrikes on the Assad regime.

"A strike would increase violence and unleash a new wave of terrorism. It could undermine multilateral efforts to resolve the Iranian nuclear problem and the Israeli-Palestinian conflict and further destabilize the Middle East and North Africa. It could throw the entire system of international law and order out of balance."

"Syria is not witnessing a battle for democracy, but an armed conflict between government and opposition in a multireligious country," Putin wrote, suggesting that the nominally secular Assad regime, despite its misdeeds, was a stabilizing force preferable to what could possibly replace it.

Putin decried the growing Islamist cadres in the Syrian rebels' ranks: "Mercenaries from Arab countries fighting there, and hundreds of militants from Western countries and even Russia, are an issue of our deep concern. Might they not return to our countries with experience acquired in Syria?"
It's plain that Putin's position was not purely altruistic.  Russia has a relationship with Assad that extends to naval basing rights for the Russian navy.  Despite that he did foresee the problem of Islamist extremism infiltrating the Syrian rebel movement.  The Americans, however, believed that the Syrian regime would go the way of the Arab Spring and so we repeated the cardinal mistake we also made in Libya.

Now, like a zealous malignancy, ISIL has morphed into ISIS, threatening both the Iraqi and Syrian states and, in turn, possibly the stability of the entire Middle East.
Posted by The Mound of Sound at 11:08 AM

I admire Putin's competence, pragmatism, intelligence, and leadership. I wish any of our Canadian leaders were even half as effective for Canada as Putin has been for Russia.
I'll probably be pilloried in some quarters for saying that, but fluff Western conservative hawk sentiment. Yes, I know Putin is ruthless, but he's efficiently ruthless.
It's hard to argue with results. I can say, I wish Truman didn't nuke Japan, as much as I wish Putin didn't bomb Chechnya into the stone age, as much as I wish Grant had carried on with Radical Reconstruction after the USA Civil War.

I see Putin more in the image of a mob boss. Very calculating, insightful, always thinking well ahead of his rivals, yet stone faced and extremely difficult for others to read.

The US doesn't seem to think that a country like Syria could have evolved from Assad towards a fairer, more democratic, more liberal society. It likes the Tabula Rasa neo-con liberal-interventionist model of nation building: where you wipe out everything about the "evil" government, install a new, technocratic, government, hold an election, and hope for the best (and never plan for the worse). Libya, Afghanistan, Egypt and Iraq are all far worse off after trying this new US model: but it hasn't deterred the US from following it in Syria, and to some extent Ukraine.

I honestly don't think many influential Americans actually believe in their leaders' preferred model of nation building. But the United State's democratic institutions have for decades put too little emphasis (and dollars) upon trade, aid and diplomacy: these are under control of an unfortunately disfunctional congress. And so that leaves only military action and covert action as a discretionary options: these are under control of the imperial presidency and are often hidden from proper congressional scrutiny.

One of the outcomes of American militaristic flailing may be the attempt of many illiberal regimes to form closer military and economic alliances with Russia and China, and, of course, to develop nuclear weapons.

Hi, Chris. Thanks for your insightful, if troubling, contribution. Your comments are supported by Andrew Bacevich's observations that, in modern America, the use or threat of force has displaced diplomacy as the principal instrument of foreign policy. What do you make of Hillary's remarkably bellicose posturing of late?