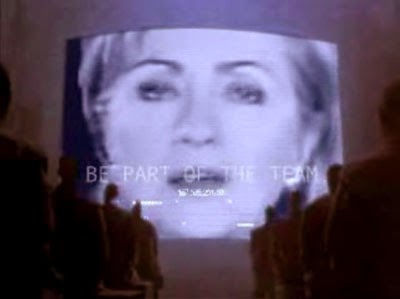 The Empress strikes back and she's coming on hard - right.  Barack Obama's ex-secretary of state, Hillary Clinton, bit the hand that once fed her with a drive-by attack on her president's foreign policy.

Hillary slammed Obama on both Syria and Gaza.  She criticized him for not acting decisively on Syria at the outset.  Obama should have helped "build a credible fighting force" of people involved in the original anti-Assad rebellion.  She blamed the president's failure for leaving the door open for radical Islamists to take over. Wow, that sounds like exactly what happened in Libya while she was secretary of state.

Hillary showed her true, neo-con colours with her support of Netanyahu's butchery in Gaza.  She naturally fell onto the banal business about Israel's right to defend itself but she even went further when asked about the civilian casualties in Gaza.  Hillary's response?  It was basically along the lines of "shit happens."

Clinton added that the U.S. also tries to avoid civilian casualties but sometimes mistakes are made.  The trifecta came when she blamed the civilian deaths on Hamas.  "I don't know a nation ...that hasn't made mistakes, but ultimately the responsibility rests with Hamas."

There you have a picture of the woman who stands to become the first female president of the United States.  Hang onto your hat for this woman plainly has something to prove - that she can be as bloodthirsty and obnoxious as anyone the  Republicans can throw against her.  Today, that's the American way.

” I guess she is ready to begin to rip the Clinton franchise away from the Obama franchise,” said Steve Clemons, an Atlantic foreign policy blogger. “This is a staggeringly important interview and, in many ways, is going to reawaken the substantial resistance to her as a reckless interventionist by some quarters. … Her comments on Syria are very provocative.”

One Democratic operative who asked not to be identified said the clear takeaway from the interview was simply that Clinton advisers are “good poll readers,” a reference to Obama’s sinking public approval ratings. A Clinton adviser replied, “That’s ridiculous,” stressing she has no polling operation.

Your post elucidates what is wrong with our politics today, Mound, that can be summed up in two words: political opportunism.

I suppose that's true, Lorne. Only with Clinton, opportunism comes at the cost of lives and suffering.