There It Is Then, Welcome to Our Own Hundred Year War. 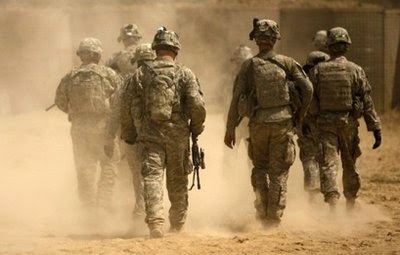 According to the former chief of the Australian army, the West has just begun what he foresees to be a hundred year war with Islam.  Now "professor" Peter Leahy says radical Islam has us in its sights.


Currently the director of the National Security Institute at the University of Canberra, professor Leahy told Daily Mail Australia that as a liberal, secular society, Australia is perceived as 'the far enemy' by radical Islamic groups and individuals, and would no doubt continue to be targeted.

'We are already affected in that there are places that would be wise for us not to travel to and there have been terrorist bombings in places that we do travel to, as we can see from 9/11 and both of the Bali bombings,' Mr Leahy said.

'Australia is involved in the early stages of a war which is likely to last for the rest of the century,' he said.

'We must be ready to protect ourselves and, where necessary, act pre-emptively to neutralise the evident threat. Get ready for a long war.'

The problem I have with Herr Doktor Leahy and others of his sort is that they never tell us how we're going to win this supposed war or even if we're going to win.  All this guy is telling us is that, in his opinion, we'll be banging this drum for a century.  In other words, he has no idea how in hell we're going to sort this out which seems to be code for one side is going to have to exterminate the other or at least bomb them into submission and servitude.

Which brings me back to my solution.   The way to defeat radical Islam is through moderate Islam, not slung from the bomb rack of an F-16.  End the factors that radicalize ordinary Muslims.  Recognize that most Muslims have no interest in jihad and simply want to live peaceful lives in freedom.  We need to stop propping up those who oppress them - Muslim, Jewish or Christian.  We need to put the boot in with the Saudi and Kuwaiti sheikhs who fund these radical operators.  Or else we are left with Leahy's default option - endless war.  How well has that worked out for us so far?

Mound, good to see you back. Crazies like Peter Leahy try to incite public so that they be ready for such wars which are mostly invasions by the west.

I agree that Jihadists are few and far between. By invading these countries gives momentum to Jihadists.However, they're no match to the west.

What boggles the mind is that when Israel is slaughtering women and children in Gaza then it is self-defense. However, when Palestinians respond with their ineffective missiles then they're terrorists. Is Israel not a terrorist in this case?

A big factor in keeping the butchery in Gaza going is control of the narrative. It's positively episodic. We always pick up the story at the point where Gazans begin lobbing rockets while conveniently ignoring that it was Israel that deliberately broke the terms of the ceasefire before that and then opened hostilities with a campaign of airstrikes. This is referred to be Chomsky in the preceding post. It is chronicled in detail in the post "Trudeau and Mulcair Ignore the Facts."

Netanyahu needed this war to derail the prospects of a Palestinian unity government that would clear the way for statehood. Again that's something those shits we call opposition leaders wilfully ignore. It suits their political purposes to go with the Israel self-defence nonsense.