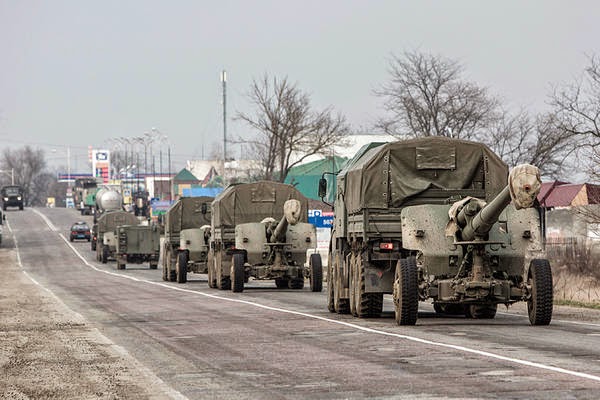 NATO claims that Russian army artillery units manned by Russian soldiers have entered Ukraine and are firing on Ukrainian forces.


The Russian move represents a significant escalation of the Kremlin’s involvement in the fighting there and comes as a convoy of Russian trucks with humanitarian provisions has crossed into Ukrainian territory without Kiev’s permission.

Since mid-August NATO has received multiple reports of the direct involvement of Russian forces, “including Russian airborne, air defense and special operations forces in Eastern Ukraine,” said Oana Lungescu, a spokeswoman for NATO.
Posted by The Mound of Sound at 9:18 AM

Better check your sources, if it is just mainstream media you've been had.

It comes from the NYT citing a statement from NATO Sec-Gen and war hawk Foggy Rasmussen. His rhetoric has been disturbingly bellicose leaving me to suspect he might even be fine with the idea of a NATO-Russia conflict before his term expires next month. Then again he could be campaigning for an extension.

The story has changed overnight MOS. Now the Russian invasion has disappeared replaced by shelling from inside Russia and Russian trucks taking military factory machines away in the returning convoy.

We hear lies about Russian tanks in the Ukraine all the time; then silence. A few days ago the Ukranians destroyed a column of Russian armour. The two Guardian journalists who eyeballed it are the only reporters in the world who don't own cellphones- no photos. The story disappeared because it was a fiction.
I read your blog because I think you are a good analyst, but you have been played by Nato and Kiev in this instance.