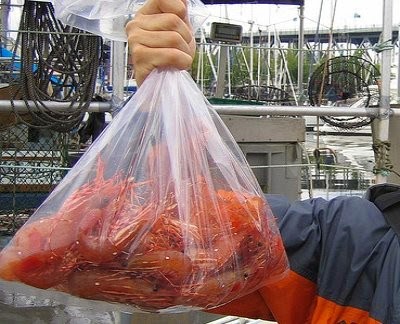 A case in point.  This summer's B.C. spot prawn season got derailed - by Asia.  Delicious local prawns that usually would go for 8-9 dollars a pound were suddenly demanding prices of 38-39 dollars a pound, head on, in Vancouver.

What happened?  Apparently Asia's (China's) shrimp/prawn stocks succumbed to some sort of environmental disorder.  Asian buyers flocked to buy up British Columbia's prawn catch (and Dungeness crabs to boot), sending market prices through the roof.  Vancouver restaurants were reported to have taken them off the menu, substituting far more affordable Atlantic lobster instead.

In the midst of this I wound up at my doctor's office.  I sat beside a fellow in the waiting room who had brought a plastic bag full of something.  It turned out he was a prawn fisherman who had brought a bag of his finest as a gift for the same doctor I see.

We began a discussion about the prawn market and this fellow was giddy at the windfall profits he was raking in.  At this point I asked the fisherman what the people of British Columbia got out of the prawns he was flogging to Asia?  After all, I said, weren't those prawns really the property of the province and people of British Columbia?  These were wild sea life.  The harvesters didn't operate prawn hatcheries.  They didn't feed the creatures.  All they did was show up to harvest and sell our prawns, my prawns.  So, when prices go through the roof for my prawns, high enough that I and most of my fellow British Columbians are priced out of the market, why then should the market windfall at least not belong to us, not the harvester?

It strikes me that we've become a little too lax in allowing those who really do little besides harvesting, packaging and distributing commodities based on public property, natural resources, to accede to ownership at below market prices.  If the market price escalates, so too should the public's share of that enhanced value.  In the case of seafood, such a provision could easily be incorporated into our licensing regime.

Products such as freshwater would require different treatment.  Water is often one of those great government give-aways especially for big business.  Yet water has a value.  We often hear today that it's the "new oil".  What would happen if we priced it fairly to take into account not only its inherent value but also the purpose to which it was being used and how it was treated afterward?  For example, there should be a far higher price if it is to wind up as an environmental contaminant in some massive tailing pond than if it was to be returned to nature in a clean state.  Likewise, those who seek to commodify it, for example as bottled water, should remit an amount commensurate with its retail value.

This conundrum is so multi-faceted that it defies specific rules beyond core principles and individual applications.  Yet, in a world running scarce of so many things, we have to safeguard the public purse if only to buffer ourselves against volatile market forces that we're going to face one way or the other.

Valuing natural capital realistically isn't anti-business.  It's merely putting the public-business relationship on a fair footing.  It's also putting an end to the vast transfer of unearned wealth out of the public purse and into private pockets.
Posted by The Mound of Sound at 11:43 AM

The concept of natural capital is, in fact, a big part of David Suzuki's message, Mound. If, as you suggest, we did in fact put a price on our precious resources and factored them into the cost of operations (eg. water in fracking), we would have a more realistic perspective on the value of those resources. This, of course, is not something the Harper regime is interested in doing. It would inhibit their obeisance to the corporate agenda of profit at any price. Such would be sacrilege to any extreme right-winger.

Who would accept a consolation prize when there is no prize to win?

@ Lorne. As Nikiforuk and others have shown, the notion of Tar Sands profitability entails a lot of accounting sleight-of-hand that has to do with subsidies, royalty deferrals, tax relief and unfunded environmental costs that are externalized. Couple that with the overheated economy that accompanies Alberta's boom cycles and evaporates wealth and you get a clear picture of why that province can fall into major deficits.

@ Anon. I don't know. I would probably accept the consolation prize if that's what was on offer. Strikes me that would be better than no prize at all. No?