Could Harper Deploy Troops Against Canadians? 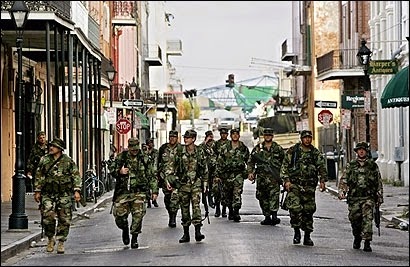 I was taken aback by a post from Geoff Kennedy at Parchment in the Fire entitled, "EU Advisors Advocate use of Military Against Strikes and Protests | Global Research."

The thrust of this report is that military forces should be employed to defend the interests of the extremely wealthy from unrest among the masses.  The key author was professor Tomas Ries, currently with the Swedish Institute for International Affairs.  Geoff writes:

Ries sees the central threat to “security” in a violent “conflict between unequal socioeconomic classes in global society,” which were “in vertical asymmetric tensions in the global village.” Put simply, the main “security issue” is class struggle in the globalised world economy.

For the inevitable social, economic and political conflicts which would emerge from this inequality, he recommended that the EU enter a “symbiosis” with the global corporations. The power of these companies “in the areas of technology and economy is constantly growing, while they are also winning influence in other areas. But they need the state and the state needs them.”

With the financial crisis, the state had already fulfilled its part in the “symbiosis.” The population had been burdened with the banks’ debts, and the living conditions of the working class had been attacked and undermined.

As a consequence of these fundamental attacks on the social rights of the working class, according to Ries, social conflict will inevitably develop which would constrain important areas of infrastructure.

The rich had to be protected from the poor, the professor explained. Since “the percentage of the population who were poor and frustrated would continue to be very high, the tensions between this world and the world of the rich would continue to increase, with corresponding consequences. Since we will hardly be able to overcome the origin of this problem by 2020, i.e., the functional defects of society, we will have to protect ourselves more strongly.”

Ordinarily I would have written this off, putting it down to just more ravings of another Euro-crank.  However much of what Ries advocates is now being put into place in the United States. I wrote about this the other day in a post about America's Posse Comitatus Act which prohibited the deployment of U.S. military forces against the American people.

That's "prohibited" as in past tense.  The intent of the Act was quietly watered down by Bush-Cheney in 2006 when Bush persuaded Congress to enact an express authority for the use of military force on American streets:   "The President may employ the armed forces... to... restore public order and enforce the laws of the United States when, as a result of a natural disaster, epidemic, or other serious public health emergency, terrorist attack or incident, or other condition... the President determines that... domestic violence has occurred to such an extent that the constituted authorities of the State or possession are incapable of maintaining public order... or [to] suppress, in a State, any insurrection, domestic violence, unlawful combination, or conspiracy..."

Which leads me to wonder - if the Europeans are toying with it and the Americans have already put it in place, would our Divine Leader be reluctant to invoke The Emergencies Act, successor to The War Measures Act, to use military muscle to put down civilian unrest, say in the form of large scale opposition to the Northern Gateway pipeline?

The Act allows the prime minister, with a cooperative Governor General, to impose martial law in the event of, "public order emergency." The Harper gang are utterly intolerant of dissent, especially when it results in protest.  How far would protest have to go before our Constitutional Beelzebub declares it an emergency under the Act?  And, as for Harper's stooge in Rideau Hall, is there any reason to trust that he would defend Canadians against the excesses of our prime minister?  With deviants like Joe Oliver ready to denounce environmentalists as terrorists who are 'inimical' to the country and with CSIS (and presumably CSEC), the national police already in secret service to Big Oil we have a government that plainly sees those who stand opposed to its will as enemies of the state.

The Governor in Council is authorized to declare a public order emergency exists in the event of a "threat to the security of Canada" as defined in s,. 2 of the Canadian Security Intelligence Service Act:


“threats to the security of Canada” means
but does not include lawful advocacy, protest or dissent, unless carried on in conjunction with any of the activities referred to in paragraphs (a) to (d).
Joe Oliver obviously had s. 2(b) in mind when he spoke of Canadian dissidents being under the influence of foreign organizations and when he declared dissenting Canadians "inimical (detrimental) to the interests of Canada."  That alone gives the game away.
The Act itself is hopelessly vague on the powers of the government on declaration of an "emergency."
Preamble to The Emergencies Act:
WHEREAS the safety and security of the individual, the protection of the values of the body politic and the preservation of the sovereignty, security and territorial integrity of the state are fundamental obligations of government;
AND WHEREAS the fulfilment of those obligations in Canada may be seriously threatened by a national emergency and, in order to ensure safety and security during such an emergency, the Governor in Council should be authorized, subject to the supervision of Parliament, to take special temporary measures that may not be appropriate in normal times;

Harper would therefore be restrained by his arch-nemesis, the Charter of Rights and Freedoms, as well as the International Covenant on Civil and Political Rights.  Once again our last line of defence against our jackboot government would rest with the Supreme Court of Canada.  Knowing Harper the defiant would be spending a good bit of time in the Greybar Hotel before the court could intervene.

.. Threats a, b, c and d can easily be linked to the current behavior of The Harper Government .. and that is not being tongue in cheek, either..

I've maintained for quite a while that the Harper Government will use provincial police, municipal police, RCMP and Canadian Forces to enforce pipeline construction and related energy infrastructure including dams and generating plants as well as port construction for dilbit, oil and LNG supertankers.

What becomes even more worrisome is the potential for this government to subvert lawful elections. We are already seeing continued attempts to jam unconstitutional laws into omnibus bills, then appealing and litigating to delay final overturning of such disturbing legislation or 'laws'.

Imagine Harper 'stepping aside' due to some inventive medical syndrome, proroguing Parliament 'temporarily' and while 'his government' is appealing or obstructing First Nation treaty rights over energy right of way or Chinese supertankers.. sends in troops to enforce the law.

Its staggering to think that thugs like Oliver, Baird, Clement and dim underlings like Calandra, Butt or Anders could collaborate with a Ray Novak, Jenni Byrne or Arthur Hamilton et al to perpetrate such malfeasance..

Driving Canada into a 'shooting war' could also extend a prorogued Parliament.. and unleash enormous unwarrented unconstitutional actions within Canada.

Paranoia ? I think not..

We are already seeing obvious signs of a deranged government and party apparatus.. as well as a secret but openly active evangelical 'caucus' housed within our Parliament Buildings

Chomsky's, Surviving the 21st Century, speech/talk at Durham Univ, May 2014 is along the same vein, when discussing the real role of our governments

When you are facing a tank, it doesn't matter much, whether it is a soldier or a cop inside.

“threats to the security of Canada” means

(b) foreign influenced activities within or relating to Canada that are detrimental to the interests of Canada and are clandestine or deceptive or involve a threat to any person,

(c) activities within or relating to Canada directed toward or in support of the threat or use of acts of serious violence against persons or property for the purpose of achieving a political, religious or ideological objective within Canada or a foreign state

- wow.. this has Harper written all over it. Handing over prisoners of war for torture, or willingness to use Candian Forces against First Nations and other environmental advocates

(d) activities directed toward undermining by covert unlawful acts, or directed toward or intended ultimately to lead to the destruction or overthrow by violence of, the constitutionally established system of government in Canada

The majority of Canadians will snooze thru it all and Harper knows this.

Justin Trudeau will smile with all his teeth and make ambiguous, passive, non-confrontational statements about everything and everyone.

Thomas Mulcair will hint that he understands why Harper would do such a thing.

Elizabeth May will be jailed and forgotten.

It's time we all faced it - Canada as we knew it is a dead thing left on the ground in a puddle of dirty oil.

Try and find a little happiness with your loved ones and grieve.

Or... take Arms against a Sea of troubles, And by opposing end them?