Plain and Simple - Dahiyeh Is a War Crime

This is Dahiyeh, Lebanon, before and after Israel devastated it and its civilian population. 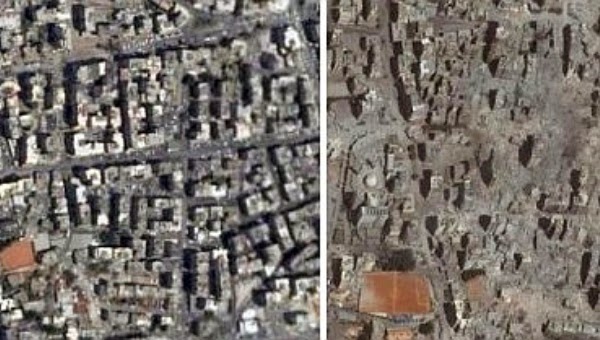 The reduction of this Beiruit suburb marked the introduction of an Israeli strategy to rain destruction and death on civilians and their neighbourhoods in deliberate contravention of the laws of war and human rights.  Civilian infrastructure, especially water pumping plants and sewage systems are destroyed after which the Israelis turn on hospitals, schools and residential neighbourhoods.  No matter how you look at it, this is wanton, mass butchery.

It was WikiLeaks that unveiled this Israeli strategy.  Particulars of it came via leaked cables from the U.S. embassy in Tel Aviv.


Israeli army officers mentioned the “Dahiya Doctrine”. One of them, General Eisenkot, said that, in relation to the doctrine, “Israel will use disproportionate force upon any village that fires upon Israel ... causing great damage and destruction."
Eisenkot was very clear that it was not a recommendation, but an already approved plan
From the embassy cable:
6. (8) Eisenkot labelled any Israeli response to resumed conflict the "Dahiya Doctrine" in reference to the leveled Dahiya quarter in Beirut during the Second Lebanon War in 2006.  He said Israel will use disproportionate force against any village that fires on Israel, "causing great damage and destruction." Eisenkot made very clear: this is not a recommendation, but an already approved plan.
WikiLeaks legal counsel and President Emeritus of the Center for Constitutional Rights in New York, Michel Ratner,  argues that Israel is deliberately committing war crimes and must be brought before the International Criminal Court.  Ratner also holds the U.S. government responsible for, while knowing full well of the Dahiya Doctrine, still funding and providing munitions to the Israelis.
Posted by The Mound of Sound at 11:21 AM