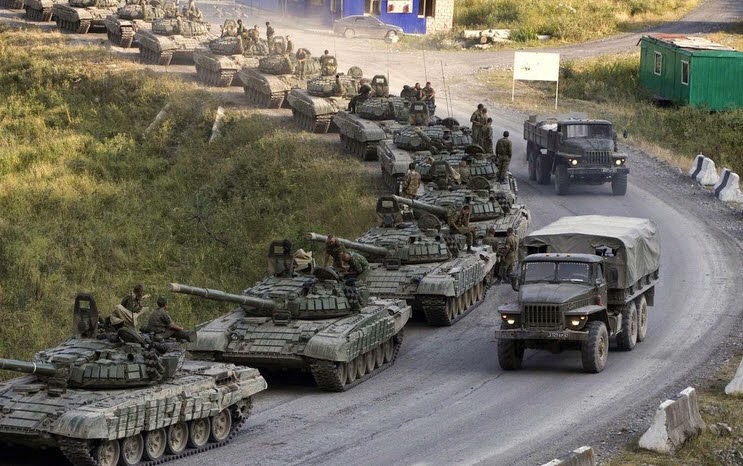 Vlad Putin, it seems, has a response to the hectoring recently from the likes of Sideshow Steve Harper and John Baird and others - "meet me in the Arctic."

The Guardian reports that Putin has had enough of Western criticism of Russian involvement in the Ukraine whose government he likens to Nazis.

Hours after Barack Obama accused Russia of sending troops into Ukraine and fuelling and upsurge in the separatist war, Putin retorted that the Ukrainian army was the villain of peace, targeting residential areas of towns and cities like German troops did in the former Soviet Union.

...And he made a pointed reference to the Arctic, which with its bounteous energy reserves and thawing waterways is emerging as a new potential conflict between Russia and its western rivals.  "Our interests are concentrated in the Arctic.  And of course we should pay moire attention to issues of development of the Arctic and the strengthening of our position," Putin told a youth camp outside Moscow.

Ukraine's prime minister, Arseny Yetseniuk, meanwhile says he'll try to bring Ukraine into NATO.  Oh no you won't, Arseny.  The "run to NATO" gambit was already tried by Georgia and it failed.  We're not going to fight your war.  Obama has already said America won't be going to war with Russia over Ukraine. Harper/Baird, both classic chicken hawks, love to talk tough but have so defunded Canada's armed forces that we won't be much help beyond hot air.  Besides, we just got put on notice that our problems with Putin aren't in Ukraine.  They're in our own backyard, the Arctic.
Posted by The Mound of Sound at 8:47 AM

And exactly what problems does Canada have with Russia in the Arctic. A glance at a map would show any idiot that Russia is an Arctic country with massive geographical presence. Not only that, sattelites show that the passage will be along the Russian coast long before the ice allows a Northwest Passage anywhere near Canada.

Canadians need to grow up and decide to swallow their shallow nativism and engage Russia honestly. If we don't we will obviously be the losers.

Hi, Rumley. The Arctic could see the rise of plenty of tensions as countries vie for the resource wealth exposed by the loss of sea ice.

Russia is dead keen on grabbing sovereignty over as much of the Arctic seabed as possible. Some prominent Russians have said that Moscow should simply take as much as it wants. Harperland has been incredibly slow to establish Canada's claims, something that Russia may exploit. Putin is refurbishing old military bases up there and rebuilding Russia's military presence in the polar region.

China too wants a piece of the action. Even though China has no Arctic coastline it says that resource access shouldn't be limited by traditional "law of the sea" rules. China already has the world's largest non-nuclear icebreaker and more in the ways. China has also spoken of maintaining a permanent military presence in the Arctic.

There are signs of an emerging "wild west" mentality in the Arctic and a pissed-off Putin could be a handful for Canada and its Ranger force with their .303 Lee Enfield rifles.

That's why I have been suggesting that Canada needs to get involved with the US Navy's follow-on to the X-47B hunter-killer drone, which seems to be developing a hell of a lot better than the X-35.

It got carrier-rated for takeoff and landing and working with manned aircraft. Being carrier-tough is a bonus for Arctic service.

It has 2X the range of an F-18 for Arctic surveillance and interception.

So, I'd like to see replacement F-18 Super Hornets for optimum value, and involvement in the USN's efforts. Canadians write good code, too.

Do you think there's anyone in DND or on the Hill with the guts to see Canada lead into unmanned aerial combat vehicles? I don't. I get the merits of the option bu I don't think it would be palatable to the RCAF or the government.

You are evading the Norwegan and Danish arctic holdings.

The US, Canada, Russia, Norway and Denmark all have valid interests and claims in the Arctic. These are based on hopes for continental shelves so far unmapped. All claims are treaty based .

Canada's claim will not be based on undersea geography the same as anybody else's. Harper's hysterical hype directed at Putin will have no affect on these treaties. Only international law will.

Mr. Harper likes to use verbal aggression. With the WWI rhetoric, is he in a twisted way, preparing Canadians for what is to come should Mr. Putin take action in the Arctic against Canada? The attitude of our PM seems to be a liking for a confrontation. Then he can call upon the US to protect us.