The Mystery of California's Vanishing Groundwater 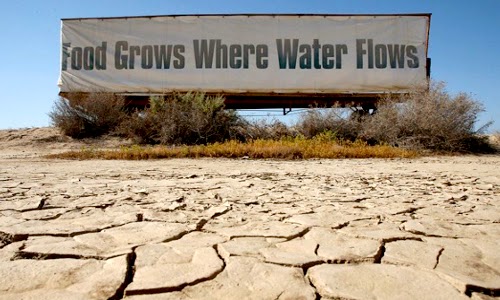 You may have already heard about it.  California, the Golden State, is reeling from three years of continuous, severe drought.

Of course you've heard about it.  The California drought is in the news almost daily.  The problem with an event like this is putting it in perspective.

Here's a new way of looking at it.  The drought is now estimated to have claimed 63-trillion gallons of groundwater across the Western United States.  That water loss is said to have caused the surface levels in the region to rise 0.16 of an inch over the past 18-months.

The estimates come via the Scrips Institute of Oceanography and the U.S. Geological Survey.

In California's Sierra mountains, the loss of annual snowpack has caused a surface rise of 0.6 of an inch.

But something doesn't add up.

The report doesn't appear to mention where, exactly, that missing groundwater is to be found.  Some of it has been added to the warming atmosphere but evaporation and transpiration are components of the hydrological cycle that carries water vapour into the atmosphere where it is transformed into clouds and returns to the surface as rain.

So, yes, it's believable that the Western U.S. has suffered a massive loss of groundwater but that moisture has to be somewhere, in some form, adding its weight to someplace else.  That could be in the form of flash floods sweeping so many places east of California.

Another impact of the drought is power generation.  California's hydro-electric capacity has been hard hit causing the state to fall back on natural gas for generating electricity.  That could be a blow to California's carbon emissions reduction targets.
Posted by The Mound of Sound at 7:26 AM

I spent several years in California during the 1960's and water was a big issue back then. Californians, at least those who thought about it, knew that water was a problem that would get worse. The voting population refused to consider any solutions that would cost money such as desalination of sea water and recycling waste water was considered too icky to even use for agriculture. Californians simply believe in their right to unrestrained use of water. This drought is man made.

Let's hope that (a) this drought breaks soon and (b) when it does that Californians take a hard look at their water security for the future.

California needs to greatly ramp up its investment in solar and wind power. Like B.C., it's got to meet its carbon emissions reduction commitments. I'm no fan of de-sal. It takes a lot of energy and California is already having to switch to fossil energy for electrical generation. It also has a waste brine issue.