Harper's War on Charities is a War on All of Us 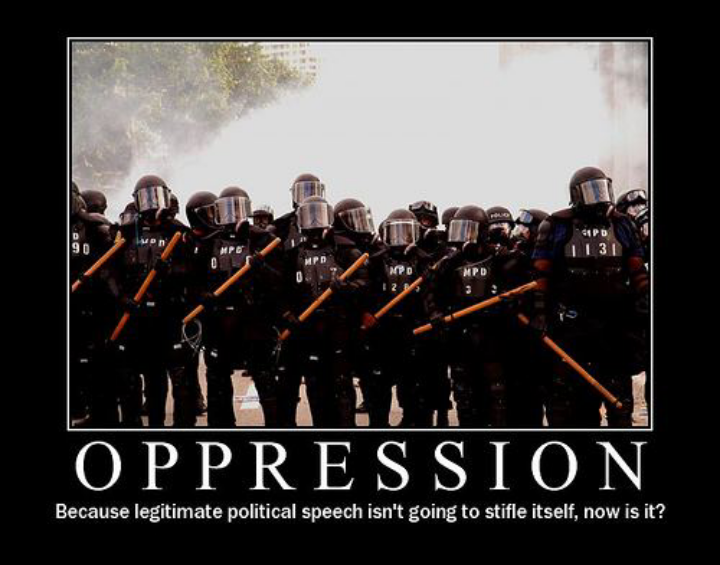 Never underestimate the scope and impact of the Harper regime's war to gag our charities. Oxford student and 2013 Rhodes Scholar, Joanne Cave writes in today's Times Colonist that the use of the CRA cudgel to silence charities by Harper & Co.is just the tip of the iceberg.

The recent Canada Revenue Agency crackdown on everyone from Pen Canada to Oxfam — noting, quite appallingly, that “preventing poverty” isn’t an appropriate charitable aim after all — has Canada’s charitable sector wondering: When is enough, enough?

The fear-mongering culture created by such frequent political audits is, unfortunately, only the tip of the iceberg in how Prime Minister Stephen Harper’s Conservative government has approached its relationship with the charitable sector. Prior to the 2010 G8 Summit, at which maternal health was a critical part of the agenda, federal funding for 11 Canadian women’s organizations was cut due to their pro-choice advocacy. Similar restraints have been placed on organizations in immigrant settlement services, environment and climate change advocacy and anti-poverty.

While compliance with the CRA’s 10 per cent threshold for advocacy activities is important to prevent abuses to the system, such an audit culture drains the resources of small organizations and paralyzes their participation in the political process. I donate to charities, as do many other Canadians, because I want them to take a stand on issues I believe in.

Federal funding, when it is available, is often short-lived for Canadian charities. Under Harper’s government, charities can increasingly get only project-based funding rather than ongoing, and decidedly less sexy, core organizational funding that enables long-term sustainability. By refusing to fund charitable organizations long-term, we assume that services such as food banks, counselling services, support groups and assisted recreation programs are not integral to the fabric of our society.

This creates what is often described as a “shadow state” in social policy — when government downloads the provision of services to charitable organizations as arm’s-length partners and uses policies, such as CRA’s political audit crackdown, to limit their independence and constrain their ideological stances. It paralyzes innovation, muzzles healthy political discourse and disrespects the fundamental role of charities in supporting our country’s most disadvantaged communities.

The women’s sector — with which I am most familiar — is still reeling from policy and funding changes imposed several years ago. These changes included the elimination of a $1-million independent research fund on women’s issues, the restriction of all advocacy and legal reform activities for grant recipients (e.g. a women’s shelter advocating on issues pertaining to violence against women) and the removal of the word “equality” from the funding program’s goals.

The CRA’s expanding audit culture is leading charities in a similar direction, but creates a confusing paradox: If charities can’t advocate on the issues that mandate their existence in the first place (a preventive approach) and can’t expect long-term government funding (a reactive approach), where will change come from?

This kind of audit culture actively prevents the civic participation our democracy relies upon, silences the organizations we care about most and forces our thriving charitable sector to become unfairly apolitical. If this frustrates you, donate to charities whose advocacy activities you believe in as a sign of solidarity and support.

Charities, you’re not alone.
Posted by The Mound of Sound at 12:07 PM

You are so right about women's groups being unfairly targeted - that occurred very early in the Harper regime.

I knew they were gunning for environmentalist groups but I was so shocked to hear that OXFAM Canada was on the list of charities being audited. Sheesh, fighting for the poor and disenfranchised is now a political statement?

Audits. They've been a favoured weapon of the Canadian government against First Nations for ages. They've started unrolling this tactic against non First Nations organizations, finally.
I knew it was going to happen like this. Discredit the organization's leadership by audits. Audits are easily shaped any way you want, if you know the right company.
Force its leadership into stepping down in an effort to install your own people. If leadership doesn't step down, then install third-party managers to take over the important functions of the organization.
Charities can't afford to play nice with the Canadian government, here. They need to fight back, not only in the courts, but to keep the government's people out of their offices. Once they're in, they're in like parasites. Only the smell of rotting meat will entice them out.
Attawapiskat won against third party management. Charities need to follow their strategy. They ran the third party management out of their community, and then won their case in the Supreme Court. Attawapiskat may never have gotten the funding they demanded, and may have lost in the court of media, but they keep their business as theirs. They've lost nothing. Now it's a matter of waiting out this government, and then taking the fight to the next one.

BY & TT - who motivates, empowers and enables us to institute these sort of changes?

It's a feature of the Stevie government: mean, selfish and stupid.

Fantino has managed to piss off nearly every Canadian veteran to the point where they are organizing to help with an ABC effort for the next election.

Now, add all the non-fascist charities out there and all their people who are outraged.

With a little luck, Stevie can get the punks in the PMO to perform something even more egregious. This is shaping up to be the #1 auto-da-fé in the history of Canuck politics.

Ed, I wonder how many CRA agents, our tax Stasi, pack evangelical church services to safeguard taxpayers from their political activism?

"... who motivates, empowers and enables us to institute these sort of changes?"

I dunno. It's kind of a nebulous question. From within, I suppose.
That's my simple answer as a Secwepemc. I could write a tonne more, and have been trying, but I continually erase all I write. I'm not satisfied with my long answer, yet. It itself is also nebulous, and difficult to explain.