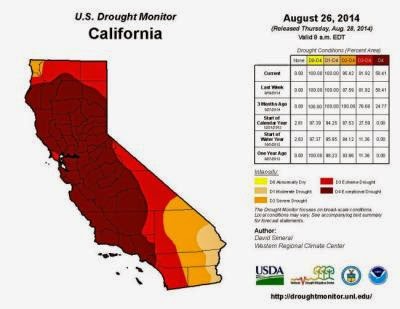 We hear lots about California and it's three-year-running drought that has left the State in severe water stress.  Wells are running dry, emergency bottled water has to be brought in to help the poor survive, orchards are being bulldozed as the trees die off, Nestle keeps plundering the state to bottle water for other places, municipalities are finally preparing to recycle waste water, etc., etc. 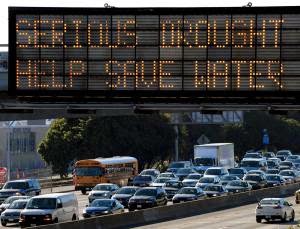 The "exceptional" drought zone is spreading ever northward, nearing the Oregon border.  Officials from Humboldt County say the Eel River levels are at unprecedented lows and people along the coast are not ready for what's coming.


Coastal areas of Humboldt County have not see the impacts of the drought as directly as inland portions, leading many residents to be unaware of the critical situation, said Dan Ehresman, director of the North Coast Environmental Center.
"People are disconnected from where our water comes from," Ehresman said. "It is easy not to think about the conditions in the rest of the county."
In the wine country, growers have cut back on drip irrigation but still hope their vines will make it through the summer.  It's next year that's on their mind.  They need relief in the form of rainfall over the winter.

Bad as a 3-year drought may be, a report from Cornell University, the University of Arizona and the U.S. Geological Survey concludes that America's southwest is at risk of a 10-year drought this century.


The researchers found that when accounting for climate change, there is a 20-50 percent chance of a 35-year long megadrought in the next century, depending on the region. There is a 5-10 percent chance of a 50-year megadrought, they reported.
The computer models also found that California, Arizona and New Mexico will be at increased risk for drought, but that the risk could decrease for parts of Washington, Montana and Idaho.
Apparel companies are looking for alternatives to replace cotton.
VF Corp. (NYSE:VFC), which makes Lee and Wrangler jeans, Timberland shoes and The North Face fleece jackets, said it started looking to diversify its raw materials several years ago, after bad weather events in China and Pakistan -- two of the world’s largest cotton growers -- hit the company’s cotton supply. While the crop grows especially well in hot climates, it is extremely sensitive to water. Not enough H20, and cotton chokes at the vine; too much, and its roots rot.
In the coming decades, water scarcity spurred by climate change will likely hit cotton the most in China's Xinjian county, Pakistan, Australia and the western United States, according to the International Trade Center, a joint agency of the World Trade Organization and the United Nations. Extreme heat waves could also harm cotton crops, as will an abundance of insects, which are expected to adapt and thrive in new environmental conditions.
It's hard to imagine how a modern society like the American southwest could endure a 10-year drought.  A 35 or a 50-year drought would likely render the area uninhabitable.

Some of these places already depend on fossil water which is running out fast. By the time the 10-year drought hits, they could already be under severe water stress from their ancient aquifers running out.
There are some parts of the US which are basically slated for drastic reductions in population . . . and agricultural output.

We have this habit of considering climate change impacts without regard to our vulnerability to them. I've noticed in the States it's usually after the third consecutive flash flood that the conversation gets around to infrastructure inadequacies.

Yes, around the world aquifers are being depleted. America's Grace satellite has detected a large loss of groundwater in the US southwest over the past 10-years.

In California the old trick of bigger pumps and deeper wells is no longer working. Unless and until the winter snowpack in the Sierras recovers the State is in trouble. Desal can take some of the pressure off but it's no answer to agricultural water needs.