Inching Ever Closer to a Shooting War with Russia

Why do I get the feeling that there are some in the West who would welcome a conflict with Russia?

Cohen described attending a mini-summit between Bush and Gorbachev to deal with the sudden collapse of east Germany and the prospect of German reunification.  Bush rattled Gorbachev when he suggested that, as a unified state, the eastern sector of Germany should also become a part of NATO.  Gorbachev held out until Bush agreed that Germany would be it, NATO would not thereafter expand further eastward.  Poland, Czechoslovakia, Hungary would remain buffer states. 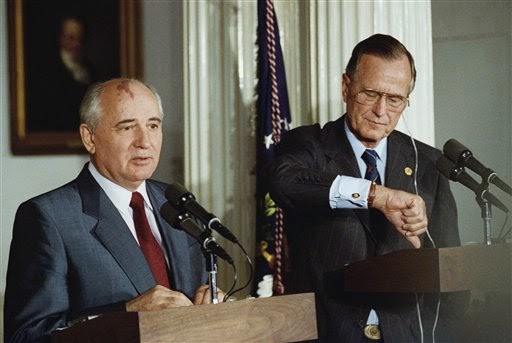 Gorbachev's fatal mistake, said Dr. Cohen, was in believing America would keep its word.  Instead, once Germany was safely in the bag, NATO proceeded to rapidly swallow up every country in Eastern Europe it could admit to the alliance.

As NATO, at the insistence of Bush/Cheney, spread right up to Russia's doorstep, we taught the Russians the utter folly of believing anything we said, even when it came in the form of a promise.

It is in this context that we need to consider how Vladimir Putin perceives our quite deliberate and calculated meddling in the Ukraine.  In an act of raw aggression, we facilitated the coup by pro-Western dissidents that toppled the admittedly corrupt but nonetheless democratically elected pro-Russian government.

Said Rasmussen, "We have to face the reality that Russia does not consider NATO a partner."

Lest you think this notion of a major war between Russia and the West is fear-mongering, the same Dr. Cohen who advised GHW Bush in his dealings with Gorbachev to end the Cold War is warning that a nuclear war is indeed possible and he's even calling for "Patriotic Heresy."

Excerpts from Cohen's address to the US-Russia Forum held in Washington in mid-June:

Add to that a question of how will China react? There has been a huge build up of US Forces in Australia not to forget the huge contingent of Americans stationed in South Korea. On top of it all is the Middle East.It doesn't stop does it?

This is a very serious issue for us all MoS, well done for the way you focused on it. One of the things that has been very disturbing to me has been the way the spin versus the facts regarding the treatment of Russia since the fall of the Wall in 1989 has become ever more divergent from each other. Another is the way Putin has been vilified/demonized for acting in a manner that lets face it is understandable, and arguably responsible for a head of government in his position. Do I agree with everything he does and/or how he does it, of course not, but he is a far more rational actor responding to realities than I have seen him being credited/portrayed as in the major NA media, and that troubles me greatly.

While I am a little less concerned about nuclear war breaking out than your quoted author is, that is not to say I am not at all, and it also needs remembering that the old USSR played around with some serious biological weapons programs and it would not surprise me to find out their remnants still exist. Bioweapons scare me a hell of a lot more than nukes do, and have since the 70s when I first started understanding the potential threats of my world thanks to living in a known first strike target in the event of war.

I've long worried about what would happen once the Russians regained enough economic strength and security to resume acting as a major power in the world, with all the interests that come with such a position. What you have posted about here illustrates why that should be more of a concern for us all, because while I am not convinced that Putin and the Russian leadership wants a conflict, I am far less confident about that from some on "our" side of things given the actions and language we have heard/seen over the past couple of decades.

I worry most though about how many of those voices have come to believe their own spin/propaganda about Russia and about the actions of the USA to be the factual reality, because it is those circumstances that I find it most easily possible for that war to happen, and if it does it will be a very bad thing for us all, even if it is non-nuclear or even just a limited tactical level use of nukes (which I think more likely than full scale strategic attack, at least in the early stages).

Very insightful post MoS, glad to have read it.

@ Anyong. Your question extends to many levels, few of them clear. This showdown, assuming it doesn't come to a shooting war that escalates out of control, will likely drive Moscow and Beijing ever closer under the umbrella of the SCO (the Shanghai Cooperative Organization), their rough equivalent of NATO. It might even nudge the SCO into an active expansion effort through southeast and south Asia, perhaps into the Middle East. Who knows? We could be in for a new world order based on blocs along the lines that Orwell conceived in "1984" only with Russia moving away from Europe and into league with China.

@ Scotian. Thanks for your kind words. The issue of Putin taking Russia to war has been the subject of some great analysis in recent months. We in the West are force-fed this idea that Putin is essentially a dictator wielding absolute power over Russia. Russian analysts point out that's a potentially dangerous and false assumption. There are greater forces in Moscow to which Putin answers and it could be their reactions, not Putin's, that could force Putin's hand. Absolute rule is only for countries such as our own.

Nuclear war? Having served during the peak of the nuclear weapon era of the Cold War I had to make myself somewhat familiar with the theories of nuclear escalation. As often as not, strategic nuclear war is something the contestants almost back into rather than a policy of escalation either of them chooses to pursue. It's incredibly susceptible to miscalculation and the inevitable fog of war.

Did you read the article from Hasselsblatt linked at the bottom of this essay, the one dealing with how we're being "mentally mobilized" for war?

Your point is well-taken that, today, we have too many leaders who believe in their beliefs, their ideologies, and simply reject facts and logic that conflict with or undermine their chosen premises.


But perhaps this explains why Putin is not coming out swinging, as The FT concludes,

One person close to Mr Putin said the Yukos ruling was insignificant in light of the bigger geopolitical stand-off over Ukraine.

“There is a war coming in Europe,” he said. “Do you really think this matters?”

Well that was certainly chilling, Richard. "There is war coming in Europe." Rasmussen has given anyone who's watched him in recent weeks ample reason to believe that he foresees war coming. I so hope I'm wrong but I get the feeling that the NATO Sec-Gen would be just fine with that.

Yes! And this morning Stephen Harper said, the Russians and their armour, is more numerous off the coast of Canada. It seems he is frothing at the mouth for a confrontation.