We Need To Do What These Guys Are Doing 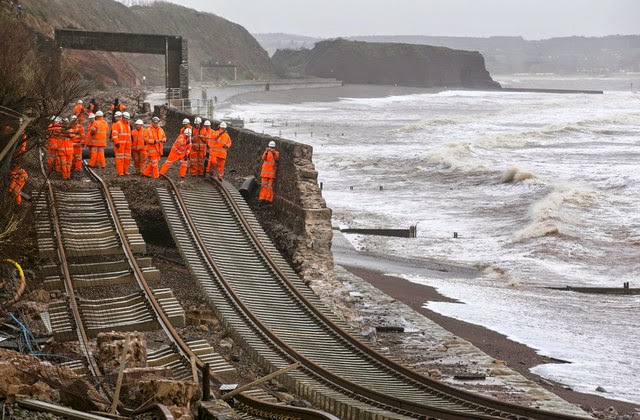 "These guys" are the Brits.  What they're doing is taking an inventory of their transportation infrastructure to assess its vulnerability to severe storm events caused by 'early onset' climate change.  The good news is that the Brits get it. They know climate change is real and that they're going to have to adapt or else.  In other words, the Brits have concluded that infrastructure designed for Halocene conditions just can't cut it in the Anthropocene.


Britain's crumbling rail network is not built to "modern standards" and is at risk of a repeat of the severe disruption of last winter unless urgent action is taken, according to a major new report being considered by ministers.

A review of the transport network's resilience was commissioned in the wake of the storms and floods of last winter. Cornwall and much of Devon were cut off and rail services west of Exeter suspended for two months after storms washed away the main line at Dawlish.

The report warns that it is a case of when, not if, disruption happens again. The severe winter of last year will be a regular fixture, it says.

But that sort of thing could never happen here, right?  Right?  Wrong.  This happened in Calgary last summer. 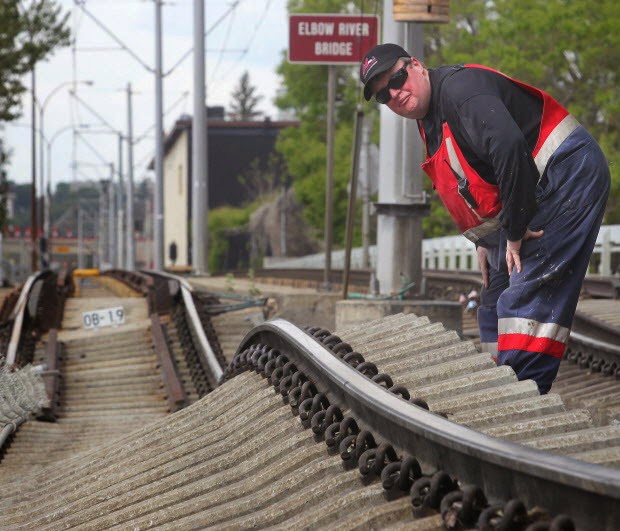 Over the summer we've witnessed how climate change impacts are overwhelming infrastructure across North America.  For example, storm sewer systems we designed and built to handle 19th and 20th century conditions can't handle the heavy downpours we get today and, for some, it's getting very, very expensive.

Jeff and Joanna Stefanek are homeowners in the Chicago suburb of Burbank. They know a thing or two about flash floods.  You might even say that, by now, they're pros.  They knew what to do when floodwater began pouring into their home Friday morning.

The Stefaneks got hit hard, but they were not alone.
Not that that was any solace. They dashed around the house, moving high-priced electronics such as a sound system and TV to higher ground atop sofas and tables. Jeff tried to save improvements such as new doors and woodwork he has installed since the last bout of flooding.
He was unable to “and now we have about $15,000 in damage,” he said.
“It flooded in 2010 and we gutted the house. It flooded again in 2013. It was like taking five steps back. And this is the second time it flooded this year,” he said.
The regional authority in Cook County is working on a flood relief plan that's due in five years.  Five years.  I expect the Stefaneks will be long gone by then.  The US National Weather Service has just issued another flash flooding advisory for their region.
Posted by The Mound of Sound at 8:46 AM