Today, however, flooding isn't just a seasonal event and it doesn't always have to do with winter snows.  Now we get flash floods where storm clouds appear overhead and unload five or six inches of rain on one spot in a matter of hours, overwhelming storm sewers and playing hell with low-lying areas.

The Americans have been whipsawed by flash flooding over the past two months from San Bernardino, California to Long Island, New York.  Detroit, Baltimore and Washington, DC, have been hammered.

Yesterday, a Kentucky town with the quaint name of Skullbone, got a 5-inch drenching.  A chunk of north central Texas saw flash flooding as predicted by the NOAA.  Arkansas got it too.

Kentucky and Tennessee remain under flood warnings for today.  Meanwhile a new front is moving in from the mid-west which threatens to bring more "disruptive downpours" to the northeast, including much of southern Ontario. 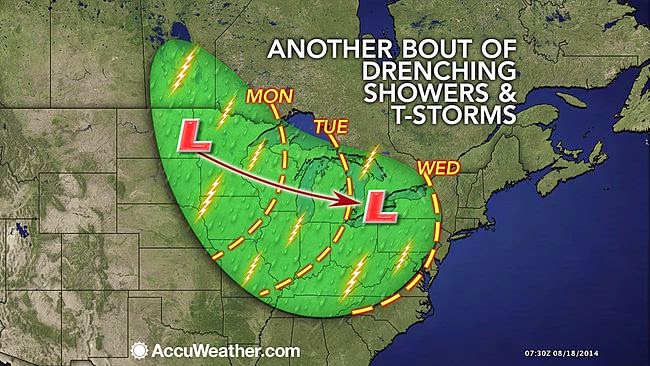 The worst part of this is that there's almost nothing people can do about it.  People can sort through their basements, get valuables up off the floor or to safety upstairs.  They can make sure the sump pump is working and that their gumboots are handy.  They can urge their governments to upgrade infrastructure to handle heavy, concentrated deluges but that's going to take time - and money that's in scarce supply in these anti-tax days.

Email ThisBlogThis!Share to TwitterShare to FacebookShare to Pinterest
Labels: flooding