The Double Bind of Climate Change 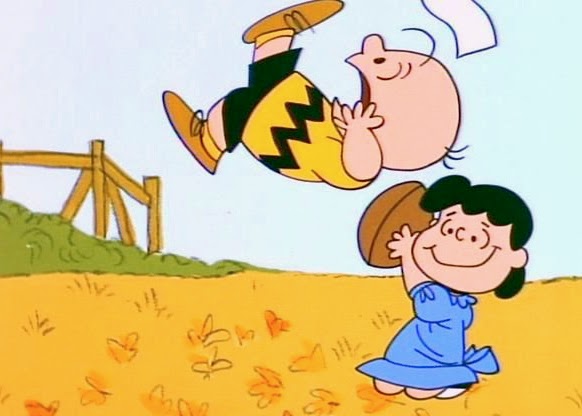 I'm still hopeful that we will see a workable, international agreement on climate change in 2015 but why does that have to feel like a pensive Charlie Brown with Lucy holding the football?  And why does Lucy remind me of Stephen Harper?

A new research study from Norway's Centre for International Climate and Environmental Research in conjunction with Statistics Norway (a Scandinavian StatsCan), concludes that the chances of getting an effective agreement are slim.  The study concludes that the measures likely to get political agreement would be ineffective while an agreement that could produce results would be "politically unviable."  Kyoto, anyone?

Professor Jon Hovi, of the University of Oslo and Cicero, headed the project. He says there are three essentials for a robust agreement:


It must include all key countries—in other words, all the major emitters.
It must require each member country to make substantial emissions cuts.
Member countries must actually comply with their commitments.

While emissions cuts benefit all countries, he says, each country must bear the full costs of cutting its own emissions. So each is sorely tempted to act as a “free rider” to enjoy the gains from other countries’ cuts while ignoring its own obligations.

“Cutting emissions is expensive, and powerful interests in every country proffer arguments as to why that particular country should be exempted,” Professor Hovi explains. “This inclines the authorities of all countries to take decisions that make them free riders.”

The researchers identified five types of free rider. Some countries—the US, for example—never ratified the Kyoto Protocol. Others, such as Canada, ratified it but later withdrew.

“We must eliminate free riding,” Professor Hovi says. “Each and every country must be certain that the other countries are also doing their part. It’s the only viable option.”

He thinks any country avoiding its treaty commitments must face consequences: “Free riding must be met with concrete sanctions. The question is what type of enforcement could conceivably work and, if such a system exists, would it be politically possible to implement it.”

The researchers say that some countries—such as the US—support international systems of enforcement that can safeguard compliance with an agreement. “At the same time, other key countries have stated a clear opposition to potent enforcement measures—either as a matter of principle or because they know that they will risk punishment,” Professor Hovi says.

“For example, China opposes mechanisms that entail international intervention in domestic affairs as a matter of principle. China is not even prepared to accept international monitoring of its own emissions.

“The UN principle of full consensus allows countries opposed to enforcement measures to prevail by using their veto right during negotiations.”

Consider that the "Lucy Gambit."  All Harper needs is to toss in his "nyet" and it's game over for any viable climate change deal.  He'll probably side with China and possibly India in thwarting any meaningful action and he'll bury his veto under a landslide of justifications, excuses and claptrap.