Is It Time to Leave the Muslim World to Sort Out Its Own Troubles? 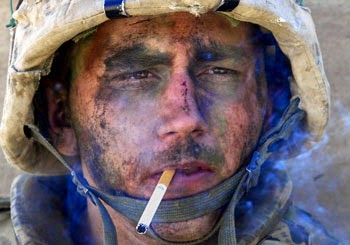 
"...the Middle East today is riven by a series of overlapping conflicts along multiple fault lines, driven in good part by protracted government failures and exacerbated by misguided outside meddling. There's the division between Sunni and Shiite, of course, and between Islamists (of many different stripes) and traditional authoritarians (also of several different types). Add to that mix the conflicts along sectarian lines (as in Syria, Lebanon, Iraq, and elsewhere), and the recurring suspicions between Arabs and Persians. And don't forget the conflict between Israeli Jews and Palestinian Arabs, which still reverberates throughout the Arab and Islamic world.
"Here's where Americans need to remember the United States may have permanent interests in the Middle East, but not necessarily permanent friends. In terms of its strategic interests, the central U.S. goal since World War II has been to prevent any single power from dominating the oil rich Persian Gulf. However troubled we may be by all the divisions and quarrels in the region, those conflicts also make the possibility that one power will dominate the region more remote than ever. Does anyone seriously think Iran, Iraq, Saudi Arabia, the Islamic State (formerly known as ISIS), the Kurds, Russia, Turkey, China or anyone else is going to take over and manage this vast and turbulent area, and smooth out all these rifts and feuds? Of course not. And if that is the case, then America's primary strategic goal will be met whether Washington lifts a finger or not.
"Some will argue that we have a moral responsibility to try to end the obvious suffering in different places, and a strategic imperative to eradicate terrorists and prevent the spread of WMD. These are laudable goals, but if the history of the past twenty years teaches us anything, it is that forceful American interference of this sort just makes these problems worse. The Islamic State wouldn't exist if the neocons hadn't led us blindly into Iraq, and Iran would have less reason to contemplate getting nuclear weapons if it hadn't watched the United States throw its weight around in the region and threaten it directly with regime change.
"So instead of acting like a hyperactive juggler dashing between a dozen spinning plates, maybe the best course is to step back even more than we have already. No, I don't mean isolationism: What I mean is taking seriously the idea of strategic disengagement and putting the whole region further down on America's list of foreign policy priorities. Instead of constantly cajoling these states to do what we think is best -- and mostly getting ignored or rebuked by them -- maybe we should let them sort out these problems themselves for awhile. And if any of them eventually want American help, it should come at a steep price."
Posted by The Mound of Sound at 11:48 PM

Ha! As long as there is money to be made from conflict, expect no one to butt out.