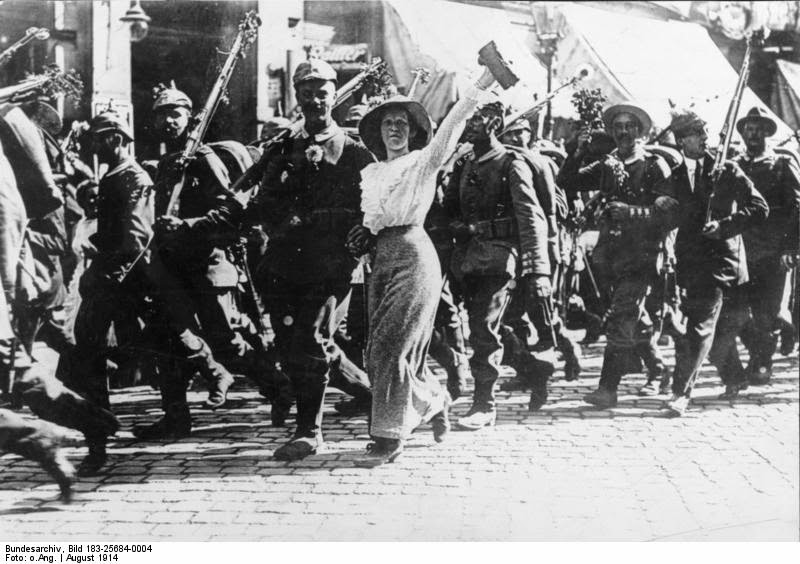 It was earlier this month that the German financial newspaper, Handelsblatt, warned of the dangerous spread of war fever throughout Europe.  The paper found that Europeans were being "mentally mobilized" for war.

Something eerily similar is happening in America.  In today's Washington Post, columnist Anne Applebaum questions whether the European people today are all that different from the complacent, care free Polish population in the summer of 1939.

Instead of celebrating weddings, they [the Poles] should have dropped everything, mobilized, prepared for total war while it was still possible. And now I have to ask: Should Ukrainians, in the summer of 2014, do the same? Should central Europeans join them?

I realize that this question sounds hysterical, and foolishly apocalyptic, to U.S. or Western European readers. But hear me out, if only because this is a conversation many people in the eastern half of Europe are having right now. In the past few days, Russian troops bearing the flag of a previously unknown country, Novorossiya, have marched across the border of southeastern Ukraine. The Russian Academy of Sciences recently announced it will publish a history of Novorossiya this autumn, presumably tracing its origins back to Catherine the Great. Various maps of Novorossiya are said to be circulating in Moscow. Some include Kharkiv and Dnipropetrovsk, cities that are still hundreds of miles away from the fighting. Some place Novorossiya along the coast, so that it connects Russia to Crimea and eventually to Transnistria, the Russian-occupied province of Moldova. Even if it starts out as an unrecognized rump state — Abkhazia and South Ossetia, “states” that Russia carved out of Georgia, are the models here — Novorossiya can grow larger over time.

Applebaum foresees not merely a Russian invasion and conquest of Ukraine but outright genocide of the sort visited on Jews by the Nazis.

Russian soldiers will have to create this state — how many of them depends upon how hard Ukraine fights, and who helps them — but eventually Russia will need more than soldiers to hold this territory. Novorossiya will not be stable as long as it is inhabited by Ukrainians who want it to stay Ukrainian. There is a familiar solution to this, too. A few days ago, Alexander Dugin, an extreme nationalist whose views have helped shape those of the Russian president, issued an extraordinarystatement. “Ukraine must be cleansed of idiots,” he wrote — and then called for the “genocide” of the “race of bastards.”

Applebaum even warns of a sinister plot whereby Putin will rain nuclear weapons on Eastern Europe.

...the dissident Russian analyst Andrei Piontkovsky, has recently published an article arguing, along lines that echo Zhirinovsky’s threats, that Putin really is weighing the possibility of limited nuclear strikes — perhaps against one of the Baltic capitals, perhaps a Polish city — to prove that NATO is a hollow, meaningless entity that won’t dare strike back for fear of a greater catastrophe. Indeed, in military exercises in 2009 and 2013, the Russian army openly “practiced” a nuclear attack on Warsaw.
Is all of this nothing more than the raving of lunatics? Maybe. And maybe Putin is too weak to do any of this, and maybe it’s just scare tactics, and maybe his oligarchs will stop him. But “Mein Kampf” also seemed hysterical to Western and German audiences in 1933. Stalin’s orders to “liquidate” whole classes and social groups within the Soviet Union would have seemed equally insane to us at the time, if we had been able to hear them.
But Stalin kept to his word and carried out the threats, not because he was crazy but because he followed his own logic to its ultimate conclusions with such intense dedication — and because nobody stopped him. Right now, nobody is able to stop Putin, either. So is it hysterical to prepare for total war? Or is it naive not to do so?
Wow from conquest to genocide to nuclear war, Applebaum beats that war drum to death.  Hers is a self-fulfilling prophesy.

Our understanding of 'modern' Eastern European history may not be what we understand it to be. The Western Zionized version is not a pleasant one when you consider the facts.

I challenge the idea that Poles (and Czechs, Romani, Serbs, Hungarians, etc) were complacent. They were literally caught in the middle of the Russians, who were bludgeoning people everywhere as they advanced West.

As the strength of Germany increased, it can be argued that many of these countries saw the Germans as protectors, not invaders.

It can be argued that Eastern Europeans were easily coerced into supporting the Germans because they represented 'the other side': seemingly neutral right wing politics compared to the absolutes of communism.

Today, I'm concerned about what we're getting as 'news' in the Western media because the current situation is equally messy. What do we really know about the leadership of the Ukraine, except that many of them are known fascists? Why are we supporting known fascists? Why isn't Putin saying anything about the situation? Is he even in charge, like the scenario in 'Sum of All Fears'?

In the run-up to World War II, nearly every Western country supported the Germans. Even the Bush / Walker family supplied the Nazis and only acted against them (and got their countries to jump in for them) when the Nazis occupied their facilities in places like Poland and Silesia.

Back to the present: we need to remind ourselves that this is all about money and like or not, we're on the wrong side of right. With Putin promising to move away from the US dollar in favour of other currencies, he would put an end to the American hegemony of the world's trade, but also endless expansion of military contracting, debt, wars and other ugly political 'false flag' operations around the world.

I've rambled, but know this: the Poles did not want to sit idly by as their brothers were stabbed to death and mothers and sisters were raped, but how can you expect that they would do anything different?

Is it possible that the people of Ukraine are accepting the Russians because their own government is far worse and they can't do anything about it?

I think Putin has called the Ukrainian government fascist and has compared the assault on Donetsk to the Soviet experience of German assaults on their cities.

My take is that there are no genuinely good guys in this fracas. Yet it is the Western way these days to pick sides, put a white hat on one and a black hat on the other. It echoes back to Bush's line that "you're either with us or you're with the terrorists." It's a logic that goes well with advancing Western authoritarianism and illiberal democracy.

All Russia has to do is wait. For Winter.
Ukraine will be in dire straights without Russian gas. And the USA does not have the infrastructure in place to supply Europe with the gas it requires over this coming Winter. And even if had the infrastructure, it doesn't have the gas reserves.
Even then, Ukraine's armed forces are in retreat from Novorossiyan's rebels. Those not in retreat are encircled.
The West and Ukraine are in panic, which is why the shrill warnings of Russian invasion of Ukraine.
Russia is winning this proxy war. By seemingly doing nothing but waiting. Oh, sure, Russia might be supplying the Novorossiyan's with arms and advise, but nothing overt.
In fact, the only overt thing Russia has done was send in humanitarian aid without Ukraine's permission.
Russia is winning, which is why the West is getting desperate. I only hope the West isn't so desperate, they stumble into war with Russia.

Wow, that article. But what makes it really scary to me is that it reeks of projection. That's the way the Washington Beltway seems to think; everything there is "Well, that's what we'd be doing given the chance, so he must be planning it!"