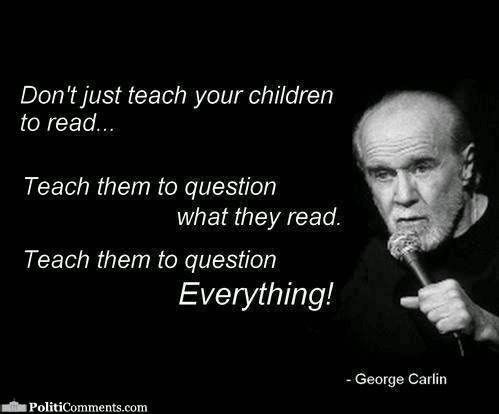 They're already facing some serious challenges coming their way before all that long, let's teach them the difference between absurdity and reality, the gift of critical thinking.  That's been heavily drummed out of us these past two or more decades and it shows in the mess we've created during that interval.

Dan Arel, in his book "Parenting without God,"  argues that, in a society "ruled by absurd religion and other dogma," critical thinking is more important than ever.

One important thing to teach our children is how to think critically. It is easy to tell them they should, but it is not as easy to teach them how, mainly because we may not be that great at it ourselves.

How many atheists do you know who are anti-GMO or anti-vaccination? We know these can be smart people who took on a position that is full of emotion, misinformation or bad research methods.

...Our children should be using this method every day in all matters of life. With claims from friends, family, parents, and teachers, they should be well prepared to question everyone and everything. Doing this also allows them to become their own person and not simply a carbon copy of what people are telling them to be.
Many of us, especially those who grew up in religion, had it engrained that the questioning of claims is frowned upon and God has an exact plan for who we should be. Many never break out of that cycle and allow those they consider authorities to dictate how their lives should be led. The generation we want to raise would be a generation that questions everything, from religion to government and even science.

We often imagine we cannot question science, but the core of scientific research is questioning. That is what peer-review is all about. Theists, especially creationists, often claim we all have faith in science, or call science a religion because we simply accept what scientists say. This could not be further from the truth. However, this is something important we should be teaching our children. The method in which we apply critical thinking to science, the scientific method and the rigorous testing scientific ideas are put through ensures that only sound ideas come out the other end as scientifically valid. All the others are discarded as nonsense or failures.

In Canada, of course, we struggle under a government that abhors critical thinking.  The Harper government is intensely faith based.  It believes in belief and spurns facts and science and demonstrated proofs.  How many Harper supporters do you know who defend their choice on raw belief, on faith in this prime minister?  My experience suggests it's not so much a matter of intellectual dishonesty as it is intellectual laziness that creates a willingness to avoid critical thinking whenever possible.  It's perhaps the intellectual equivalent of reversed polarity.

I've tried to teach my children well. I don't know how successful the teaching has been, but I remain optimistic.

There's nothing easy about it. Caution is needed to avoid implanting jaundiced cynicism. It's important that we all retain an appreciation for the need to believe something.

My school board wants us to teach critical thinking, but in the staff-meeting films they show, what they're calling "critical thinking" is really meta-cognition, which is very different. It's as if they want to appear to be proposing this revolutionary new idea of teaching kids how to think but without going the distance to allow them (or us) to actually question anything. It's to the point that I could lose my job for writing critically about any board policy. Scary.

On a different note, as a philosophy teacher, where critical thinking is key, I wonder to what extent it can be taught. Some people just don't have opinions or ideas of their own no matter how much I try to pull something out of them. I used to think it's because they've been brainwashed to just repeat the right answer back, but, after 22 years, now I think it's more like teaching music composition than teaching how to play an instrument. We all have some ability to learn the skill of playing, but many of us don't have the creativity in us to compose something original. I can teach them about philosophers, but some just can't see positive or negative implications of the theories. But it won't stop me from trying.

Do you accept evidence based reasoning as your personal source of knowledge?

"Meta-cognition" indeed. From what I found on Wiki that seems to be a term with diverse meanings such as knowing how to know or learning how to learn.

One thing I've learned from blogging is the powerful reality of group think even within the supposedly enlightened, progressives.

Critical thinking was essential in my litigation practice. It was vital to identify weaknesses not only in the adversary's case but in my own client's. I tried not to go into a courtroom without a good idea of how the other side would attack my case and how I'd rebut them.

@ DOC - yes, evidence based reasoning is an essential element of seeking knowledge.