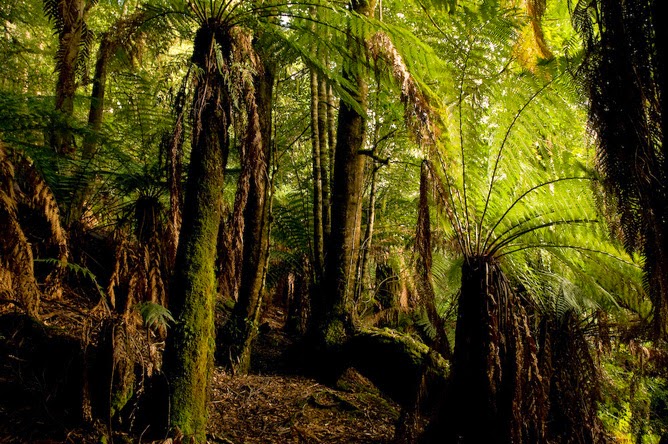 Tony Abbott is a man going to war.  His chosen target is Australia's environment and, according to Foreign Policy, he means to do it in.


Located at the bottom of the world, Tasmania is a bioregion so unique that it is listed as a World Heritage site by the United Nations for "outstanding universal value." It satisfies more criteria for that designation than any other World Heritage site on Earth.
But for Australian Prime Minister Tony Abbott, this remarkable natural legacy isn't worth protecting. Instead, it should be stripped.
Soon after being elected in September 2013, Abbott started making plans to fulfill his campaign promise of removing some environmental protections on Tasmania's forest and opening it to industry, specifically logging. In March, he invited loggers to Australia's Parliament House and told them that members of the country's Green party were "the devil" and that "the environment is meant for man." The loggers were thrilled.
A few months later, however, Abbott had to convince a different audience of his proposal -- and this time, the response was not enthusiastic. When the World Heritage Committee of the United Nations Educational, Scientific and Cultural Organization (UNESCO) met in Doha in June 2014, it unanimously rejected Abbott's plan to remove 74,000 hectares of Tasmanian forest from its list of cherished sites. One delegate said the move would have set an "unacceptable precedent." Thedecision took less than 10 minutes.
While the old growth forest of Tasmania might have been spared, Tony Abbott is proceeding apace with other plans.  One of them is to dredge a new coal port and then to dump the millions of tons of dredged soil and sand into the Great Barrier Reef.  Honestly, this guy believes that's a sane thing to do.  To Abbott, trashing Australia is merely taking the fight to the socialists.
Australia's opposition leader, Bill Shorten, has called Abbott an "environmental vandal," and university researchers have said his first year in office has been nothing but an "environmental train wreck." This dates back to his very first day in office, when Abbott introduced legislation to repeal a carbon tax on Australia's most polluting industries. Soon after, a document created by Abbott's cabinet surfaced, stating that his administration would no longer tolerate "any measures which are socialism masquerading as environmentalism."
And Abbott is increasingly and eerily coming to resemble our very own environmental Beelzebub.

For Abbott, all environmental regulations are merely "green tape" that hold back corporate profits. He has hacked away at that tape by gutting the Environment Protection and Biodiversity Conservation Act, the legislative process for determining whether a development project is environmentally safe. Instead oil, gas, and mining permits are now funneled to other agencies where they can get a green stamp.
To make sure no one can adequately challenge his dictums, Abbott has eviscerated federal funding for programs such as the Environmental Defenders Offices (EDO), independent legal centers that operate in the public interest.
It sounds as though Harper must have slipped Abbott a copy of the Conservatives' own environmental dirty play book.
Environmental author Bill McKibben has written that Americans who traveled abroad during George W. Bush's administration should have sympathy for Australians right now: "[I]t's not easy being citizens of countries run by international laughing stocks." The comparison is apt: Like the Bush administration, Abbott chooses to ignore or undercut federal and international law when it doesn't suit his interests.
Yet he has no qualms about using the law as a political hammer to quash the opposition: In Tasmania right now, Abbott's Liberal Party government is backing a new bill explicitly drafted to stop environmental protesters. The Workplaces (Protection From Protesters) Bill is aimed at quelling those who "prevent, impede or obstruct the carrying out of business activities." Mining and logging industries are mentioned by name, but the bill is written so broadly that it could cover nearly any business. It includes a sweeping list of prohibitions against "protest activity," with fines up to $10,000 if demonstrations interrupt business -- and mandatory prison sentences for a second offense.

I don't mean to be cynical but I'd guess the only thing preventing Harper from passing his own, protection from protesters act in advance of the Northern Gateway pipeline is the cut lip and bloody nose he's earned in past encounters with the Supreme Court of Canada.  I have to assume that Abbott has the benefit of a weaker constitution and a more compliant court.
Posted by The Mound of Sound at 6:59 AM