Famine In the Americas


When we think of famine, we tend to think of Africa.  Ethiopia, Somalia, Sudan seem to come to mind.

FEWS Net, the Famine Early Warning Systems Network, has identified Guatemala, El Salvador, Honduras and central Nicaragua as countries most at risk of severe food insecurity in 2015.  Coffee rust has disrupted incomes for many farm workers even as food prices rise due to sustained drought.


Income is also expected to be below-average over the coming year. For the third consecutive year, demand for coffee labor and wages received by coffee day laborers are expected to be lower than normal, due to the persistent effects of coffee rust. Other livelihoods in the region, including fishing and livestock breeding, have also been negatively affected by the recent drought and the transition toward an El Niño.
Compounding this situation are above-average and increasing prices of regionally-produced staple foods (maize and beans) in some areas.  The countries most affected in this regard are Nicaragua and Honduras, where red bean prices rose by up to 129 percent between January and June 2014. Prices are expected to continue to trend upward through the end of the first harvest, in September, then level off for a brief period, and then increase again until December, primarily as a result of current crop losses and the potential losses to Postrera crops projected for late 2014.

Could famine hit the Americas?  That appears to be a possibility although it's hard to imagine that Canada, the U.S. and the major countries of South America would be slow to respond with relief. 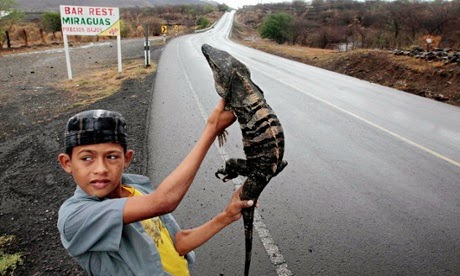 Meanwhile, the government of Nicaragua has advised its people how to fend of hunger - eat iguanas.

"Breeding iguanas brings two benefits," said Guillermo Membreno, a land management expert.  "Not only does it supply dietary protein, it also offers a commercial use for the animals."

Iguanas, he added, contained 24% protein compared with 18% in chicken.

Mound, few days ago I saw on NBC Nightly News that there is a lot of poverty in U.S. Food banks were too busy and running out of food.

I could not find the video but I was not surprised. Visit any major city in U.S and Canada and you will see beggars all over the place. The gap between rich and poor is widening.

There already is, a global shortage of food. Climate change has destroyed food crops, over the world. Droughts, flooding, tornado's, hurricanes, all more violent and more in number.

Then in Canada? Fools want to build the Site-C-Dam, likely for the tar sands and fracking. The dam will flood, the most valuable farmland, in all of Canada. Greed trumps common sense every time.

Government greed in Canada is, rabid, disgusting and sickening. So is the greed of the mine, oil and gas Barons disgusting. Harper has deregulated everything, to benefit the resource Barons.

It is as they say. Man is the most destructive animal on this earth and, the most stupid ones at that.