It's Our New Normal - It's Yours and Mine. Now Let's Deal With It. 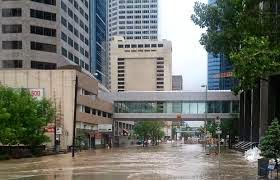 Every morning Google Alerts delivers to my inbox a digest of the day's stories about flooding.   For several years I've begun my morning sorting through these and other alerts to which I've subscribed.

Over the past two years I've noticed significant change in the flooding alert stories. What has come to dominate the flooding stories is flash flooding.  It's the same story wherever it happens.  A massive rainstorm parks over one area, sometimes just one city, and delivers a "once in a hundred year" deluge that quickly overwhelms storm sewers and leaves streets and entire neighbourhoods awash with torrents of flood waters sweeping down gullies and ravines.

What are these immensely destructive severe weather events teaching us?  One important lesson that we still choose to ignore is that the infrastructure we designed and built during the 20th century is not up to the 'new normal' of the 21st century.

Our environment in the 20th century shaped what we built, how we built it and where.  We laid out our neighbourhoods and streets and designed and constructed core services based on the environment of the day.  While we were busy doing that we did not foresee that there would be a much different, more challenging environment by the early part of the 21st century.  We had no idea.

British Columbia's west coast, where I live, is the wettest area in Canada.  Some spots average 12 to 14-feet of rain annually.  You can't live here and be a stranger to heavy, sustained rain.  That said, my town got hit with a squall that brought rainfall like I've never seen.  An inch and a half of rain in just 18-minutes.  As quickly as it began it stopped.  The interesting part is that my town, which normally has no problem with heavy rain, was overwhelmed.  There were cars floating downtown within a couple of hundred yards of the beach.   If it can happen here, it can happen anywhere.

Now the Christian Science Monitor is asking whether these deluge-triggered flash floods are the new normal.

As people clean up after torrential rains and heavy flooding in cities in the Midwest and along the Atlantic Coast, the events highlight what many climate researchers say is a new "normal" for severe rainfall in the US.

Quite apart from what long-term changes in precipitation say about global warming, these events also provide a reality check on the ability of urban areas to cope with flooding from intense downpours in a warming climate.

As we saw last year in Calgary, these flash floods can cause immense damage to buildings, to essential infrastructure and to commerce.  Roads can be washed out, bridges can be compromised, light rail lines can be buckled, sanitary sewer systems can be overwhelmed.  This sort of flooding can be extremely challenging to local officials and law enforcement and can leave provincial and federal governments with enormous costs for disaster relief.

Even if structures can survive one flash flood, they can't endure too many recurrences.  Some centuries-old villages in rural Britain have already announced that one more flood and they're finished.  It's just too costly to save those great heritage buildings from centuries past.

This morning I discussed sea level rise with our city engineer.  Our municipality is working on a "storm water master plan" that focuses on predicted rainfall curves.   Consultants have been retained to advise on the sea level rise factor, the second half of the double-whammy.  The city engineer said that we're expecting to see more of these monster-intensity squalls like the one that recently hit the town centre and they're expected to worsen in intensity, duration and frequency. Fortunately for us the sea is nearby so it's a matter of channeling flood water through conduits to the ocean.   Inland, as Calgary demonstrates, it'll be a different story.

When I asked the city engineer what the province was doing for coastal communities, he said virtually nothing.  The provincial government has apparently downloaded responsibility for sea level rise and flooding issues to the affected municipalities and regional governments.  There is no unified programme for the coast and islands.   The amount of duplication and wasted money this must cause is ridiculous.  Perhaps that's why the provincial ministries have been so cool to my attempts to engage them on this.

The engineer also confirmed that the consultants are working with the old, and now questionable, estimate of 1-metre of sea level rise by 2100.  That was the figure tossed out by the IPCC back when the Panel was warning that the Arctic could be seasonally ice free, also by 2100.   Now the US Navy has determined that the Arctic will be seasonally ice free by no later than 2019 and possibly as early as 2016 which means those IPCC estimates are out by more than 80-years.

We can't respond to these flash floods with disaster relief measures that we would have used in the past.  When a "once a century" severe weather event becomes a once every two or three years storm, no government can afford to continuously raid the treasury to write cheques for reconstruction.  Instead of shoveling money into rebuilding structures in time for them to be destroyed in the next great storm, it might be better for all concerned to assist property owners to simply relocate to less vulnerable areas.

The first step is to analyze and define this "new normal."  That's obviously not welcome to governments that don't want to discuss climate change when they need that time to focus on extracting and exporting high-carbon fossil fuels as quickly as possible.  Yet nothing our government's do will help us hold back the sea or clear those storm clouds and nature is not going to work on their schedule.
Posted by The Mound of Sound at 12:48 PM

As you know, Mound, we in Ontario are facing exactly the same challenges you describe here. Recently, for example, the city of Burlington received two months worth of rain in just three hours, causing massive flooding of basements, for which most homeowners will not b e compensated by their insurance companies.

The government of Ontario has called upon the feds for much more per annum spending on infrastructure, to which Joe Oliver replied that he has no intention of pushing Ottawa back into deficit, this at the same time he promised more tax cuts for all and sundry in the 2015 budget.

I am not optimistic about our future, for reasons that are painfully obvious.

Hi, Lorne. I came across some rainfall stats this morning for the recent flash floods that hit Detroit, Baltimore and another city in New England. These were all "once in a century" events and they were all the result of the same, severe storm system. It seemed to bear a resemblance to those "atmospheric rivers" that hit California a few years back and more recently England.

It makes no difference if, like Harper & Co., you want to deny the reality of climate change. Nothing can change the fact that flash flooding is the new normal and we need to update our planning and invest in infrastructure to minimize the losses sustained.