Ferguson, Missouri Reveals How Much America Has Lost. 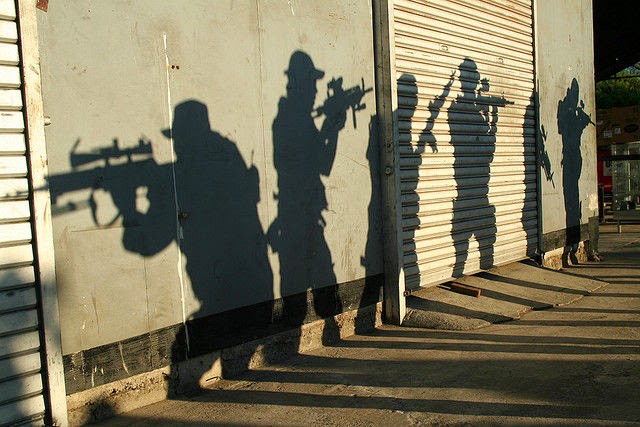 British historian/journalist, Dr. Tim Stanley, weighs in on the militarization of American society.  He writes, "America is entering an arms race with its citizens."

The schools of Compton, Los Angeles, appear to have embraced the nuclear war principle of Mutually Assured Destruction. After a national wave of school shootings, local police are arming themselves with semi-automatic AR-15 assault weapons – on the grounds that if some nut opens fire in the classroom, they will be able to take them down with greater accuracy and punch. All of which has shades of Nato’s old assertion that if the USSR ever tried to seize Berlin, they’d level Moscow with ICBMs. It’s depressing to think that this time around the MAD principle is not being applied to the Cold War battlefield but a geography class full of eight-year-olds.

The subject du jour in the US right now is the militarisation of the state – not only because it is obviously unhealthy to have public servants armed to the teeth, but because it also represents an inversion of the American ideal of a light-touch government staying out of the affairs of an self-sufficient citizenry. Some liberals will doubtless say that arming school police in this way is a sign that America’s gun laws are “crazy”, but that’s to miss the real issue at hand. There’s something amiss in the traditionally distant relationship between citizen and the state.
...the idea of schools patrolled by people with assault weapons turns the stomach. It suggests a society where trust has evaporated, where peace can’t be guaranteed anywhere and where social dislocation has driven everyone to the brink of internecine war. Moreover, it suggests that the state has given up trying to find serious solutions to social problems. Easier to just embrace the coming anarchy and fight back with bullets.
Not only is that nihilistic, but since when did the agents of a state supposedly governed by a constitution think they gained the right to treat the citizens like savages?
...More faith, more personal activism, more compassion, more care for the mentally ill will not turn the situation around overnight. But it’s surely a saner long-term solution than sending the police equivalent of Curtis LeMay into the playground.

After having had a confrontation with Curtis Lemay, President Kennedy was supposed to have said, "Keep that man way from me!"

Unfortunately, Mound, Americans have been seduced by Lemay's philosophy -- the only way to deal with your enemy is to obliterate him.

Don't need to go that far back in time for Lemay - Schwartzkopf will do just fine.

Just a bit of trivia, Dana. Did you know that Norman Schwartzkopf's father set up the Shah's secret police, the dreaded Savak?

No I didn't but it doesn't especially surprise me.

What would surprise me about the USA would be admitting to their responsibility for so much of what's gone so wrong in the world since the '60s.

And increasingly so here too.

With no end in sight except THE END.

Which is liable to be viewed as a blessing by all the other sentient beings on this planet and elsewhere.

Regarding the militarization of police forces in N.A. one is again, but not surprisingly, amazed at the power holders’ inability to observe history. I certainly hope all the folks who see a future in protecting the rich, regardless of civil or private organizations, think of ways to prevent 4th generational warfare. We haven’t seen it yet so I am thinking…

…good way to die. When society has been reduced to haves and have nots the masses have won. I suspect we will see tactical nukes used by the haves. It still won’t save them. That is a problem with the wealthy - they have usually inherited it. Hence, they are no brighter than the masses that have decided they want the wealthy dead. The wealthy will continue to move to enclaves. Mmmm. Nice target. The haves will not be the only ones who ultimately will have access to long distance weapons.

Society in this world is global. All the toys society has is the result of global. If someone wants to go back to feudal society in the 1200s perhaps that little enclave might survive for a while. As we exist today? No. How many people could survive for a year starting from scratch? Percentile-wise in the western societies, I am guessing a rounding error.

The only ones who might survive global catastrophe will the the people already living at subsistence level.

Alison at Creekside has an excellent piece that ties in with this:

It seems we are all potential terrorists as far as those who wield power are concerned.